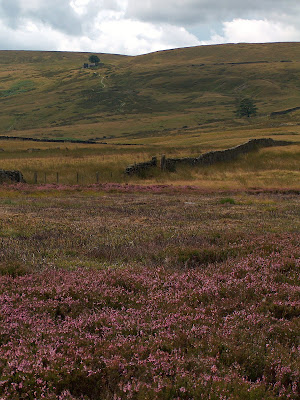 Stanbury Moor with Top Withins upper left
Yesterday I had a day out with two former work colleagues. There was Emma - a very dogged and hard-working young English teacher who I am proud to say I appointed four years ago - and Sofia, our "worth her weight in gold" English teaching assistant.
I picked Emma up and we headed to the northern suburbs of Sheffield to collect Sofia. Then it was up through Greno Woods to the A629 towards darkest West Yorkshire - where the Pennine moors vie with Victorian milltowns for supremacy. Shelley to Huddersfield to Halifax to Oxenhope and so to Haworth. Haworth - the home of the Brontes.
But we didn't stop there at first, instead we made our way to the little moorland village of Stanbury. Just beyond it, as my map research had predicted, there was Back Lane. We drove along this winding track as far as we could and parked up. We were really on the edge of the moors now - purple heather, summer-dried grasses and gorse, ancient stone walls painstakingly constructed by long dead moorland sheep farmers, billowing cumulo-nimbus clouds scudding over the horizon from Lancashire.
The weather forecast had predicted rain showers but thankfully they held off as we made our way along a section of the Pennine Way towards two remote farms - Lower Heights and Upper Heights - now upgraded countryside getaway homes. Outside the second I noticed a sign:"Please Respect our Privacy". I might have a similar one made for the entrance to our suburban semi.
Emma and Sofia are not great walkers so I was strolling in first gear. I didn't want to push them. We had just under two miles to go. But up ahead I could see our destination. Some dark specks near the bleak horizon - Top Withins. A farm that was finally abandoned and left to fall into ruins in the 1930's.
Why were we heading there? Well I know one or two of my revered readers will have already guessed. We were on our way to Wuthering Heights. It is said - though this may be fanciful speculation - that Emily Bronte the authoress of the wonderful Yorkshire novel "Wuthering Heights" modelled the Earnshaws' remote farmstead on this very place. 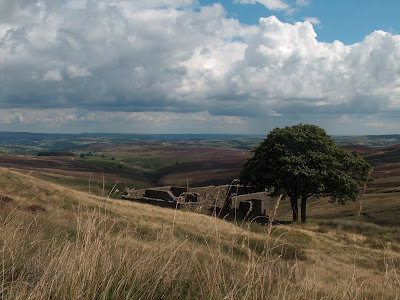 Top Withins - Wuthering Heights
Emily, daughter of Patrick Bronte - the vicar of Haworth, was born in 1818 but died of tuberculosis at the age of thirty, just a year after her masterpiece was first published. As a teenager, it is known that she was prone to rambling round the local area - visiting remote villages and farms, observing geographical features of the wild landscape around her. It is entirely possible that she knew Top Withins and I for one believe that it was indeed a significant ingredient in her creative thinking.
After the lovely walk up to Top Withins we returned to Stanbury and a pub called - yes, you guessed it - "Wuthering Heights" where we had what the menu called a "Walkers' Lunch" of homemade cauliflower and broccoli soup with fresh filled baguettes. Thunder rumbled overhead and rain lashed down but as we left the sun broke through again and we made our way into Haworth to visit the Bronte Parsonage Museum.
A wonderful day out with two lovely women and me - the brooding Heathcliff - glowering at the heavens - "Get thissens movin' else ah shall thrash thee!" (Translation - "I would be extremely grateful if you could possibly walk a little faster"). 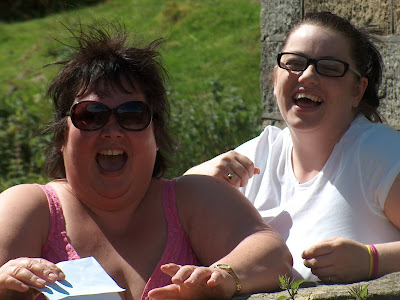