On Sunday, after repeatedly plunging my dirty washing in a big blue bucket I bought from Tesco Lotus - and then hanging it outside to dry, I went out to the wacky races roadway and flagged a taxi  down. I was off to Rot Fai Park to do what many northern Bangkokians do on a Sunday - hire a bicycle and pedal away round the park's tree-shaded circuit.

Halfway round there's a butterfly house with free admission and it's there that I managed to snap these two specimens. Here's the rhymosia plagueus or Georgia Dandy, a gaudy creature that is only happy when it has got its proboscis deep inside a nectar-filled blossom:- 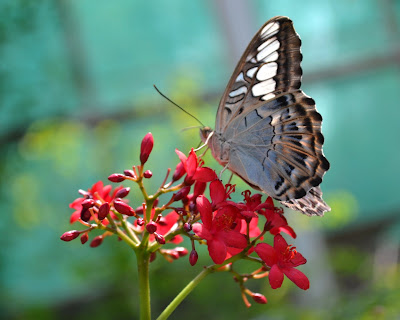 And here's the johannes grayus or the Welsh Earl, a flamboyant butterfly that is equally intent on proboscis plunging though here it is resting on netting after a particularly torrid session in the herbaceous border:- 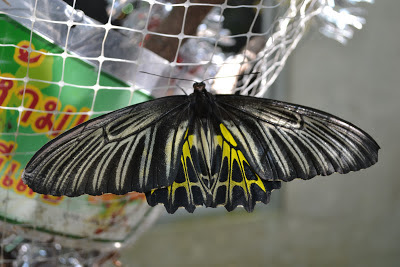 After a delightful thirty baht lunch in the park, I walked a mile or more along Phaloyothin Road towards Major Cineplex at Ratchayothin. Outside the refurbished Central Plaza I watched a Honda car smashed by a bus. The stupid driver cannot have been looking and her car was shunted forwards sideways on as you can see from the picture I took a minute or two after the accident.

What seemed pretty amazing to me is how the two women in the vehicle climbed out through the passenger door and proceeded calmly to make mobile phone calls. Then the bus driver and his conductor got out of the bus and did the same. Neither party communicated with each other and there was no "Are you hurt love?" or "Why weren't you looking you silly cow!" The women stayed on their side of the car and the two men stayed on their side. They didn't even look at each other and then the helmeted policeman arrived. The calmness of it all was typically Thai. By the way, the windows on the driver's side were shattered and the driver's door was caved in. Then I hiked onwards to the grand marble  penthouse apartment of the Bangkok-Boothies where I snapped this picture of the young lady who is the reason I am in Thailand a second time. It's Baby Alexa aged three weeks. She's looking at Sir Yorkshire Pudding as if to say "Daddy, who is this man with the big camera and why is he pointing it at me?" She will very probably still be alive in the year 2100 but sure as hell I won't be:-
- January 14, 2013