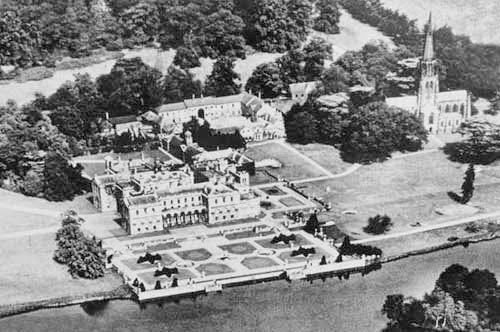 Clumber House to the south of Worksop in Nottinghamshire was the country residence of the Dukes of Newcastle. In their heyday, like other English aristocratic families, this particular family lived a life of privilege and ease with so much wealth that there was little they could not do. They hired the top landscape gardeners and brought in craftsmen from France and Italy as they dined on fine foods prepared by minions of servants. To some extent the obscene luxuriousness of their lifestyle was part of  a nationwide competition between aristocratic families. A snobbish game of one-upmanship.

In 1938, Clumber House was demolished. A website called "Lost Houses of England" cites the reason for demolition as "insufficient wealth". Many other grand houses were knocked down in those days. Time was running out for any aristocrats who were ill-prepared for the modern world where social and political pressure for greater fairness and equality had become unstoppable.

Eventually, the extensive parkland that surrounded Clumber House came under the control of The National Trust and today anybody can visit a place which would have once been out of bounds for ordinary folk. Even though the grand house has gone, the Grade One listed church remains and the stables and the ornamental lake and the estate village of Hardwick and the grand stone gates and so on.

I drove over there yesterday morning and hired a bicycle which I rode for two hours through the southern section of Clumber Park - stopping occasionally to get my usual fix of photo opportunities. It was bitterly cold and I was glad I had wrapped up well for the outing - Hull City ski cap, fingerless thermal gloves, Hull City manager's jacket and lined walking trousers. I was making a significant fashion statement!
- December 13, 2014