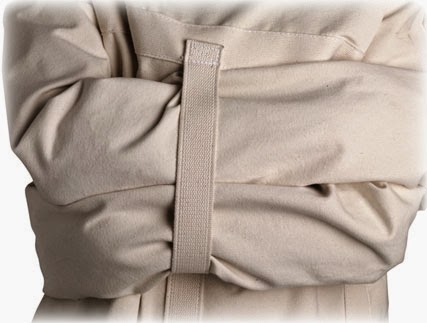 In those far off days they kept thousands of people in mental hospitals on the edges of villages, mostly far away from cities. We thought of them as lunatic asylums and we called their residents loonies. They were forbidding places surrounded by trees with big iron railings and local legends to protect them from prying eyes.

There was a small one on the edge of the next village - Brandesburton. Sometimes the loonies got loose and the police had to hunt them down. Once a loony stole my Hercules bicycle from outside our house. It was my pride and joy - a surprise present on my ninth birthday. It had maroon paint and was never designed to be ridden by a grown man. I rode it everywhere until the loony stole it. He pedalled all the way to Hull on it which is where the bobbies found it. They brought it back and the loony was locked up once more.

One summer the local youth club leader took a bunch of us to Brandesburton Hospital to play cricket with a team of loonies. We weren't too keen. I mean, perhaps being a loony was infectious. We didn't want to become loonies ourselves. I remember that one big, strapping loony climbed up on the pavilion roof. A couple of nurses were yelling at him to come down but he took out his willy and urinated on them. You don't see this kind of thing at Lord's or even at The Gabba in Brisbane, Australia.

When I was eleven I was a choirboy with an angelic voice. Every Sunday I sang in Holy Trinity Church where I had been christened in the year of my birth. It was the tradition that the best choir boy got to start The Christmas Eve Service with a solo rendition of the first verse of "Once in Royal David's City" before leading the choir down from the vestry and along the aisle to the front of the church. So in 1964 it was my turn.

Once in royal David's city,
Stood a lowly cattle shed...

I was standing at the top of the steps in my white surplice over a black cassock feeling a little shaky. Even before I had reached the word "shed", the loonies were turning round to ogle at me with lolling tongues, pallid cheeks and rolling eyes. They had been bussed in as usual from the mental hospital to fill the rear pews. And I can tell you it is not easy for a nervous choirboy to sing a solo like that when he has aroused the special interest of twenty or thirty loonies.

In the carol it says that Jesus lived on earth with "the poor, and mean, and lowly" but it doesn't say anything about loonies. And I doubt that when Jesus was a carpenter's apprentice he had to sing a solo to a full church. He might have been God's only begotten son born of a virgin but he would not have felt so smug and holy if he'd seen a loony pissing from a cricket pavilion roof.

Forgive me for I am rambling on. What made me post about lunatics today? Well, now that the mental hospital sites have been turned into exclusive housing estates for the middle classes, the loonies have been let loose within the wider community. I saw several this morning as I drove to and from Hillsborough - close to another massive mental hospital of yesteryear called Middlewood.

There was a woman driver sitting alone in a Ford Focus, nattering away to herself and even laughing. I swear it's true! I was next to her at some traffic lights. There was nobody else in the car! She must have been a loony. And there was a pedestrian. I had my window wound down and he was walking along with an earpiece in his lughole talking to himself about Christmas shopping and what his dad had said. He also must have been a loony.

I left my car at the "Seat" dealership and wandered round the back of Sheffield Wednesday's football stadium. I counted fourteen pedestrians glued to their mobile phones - checking texts, checking the weather, checking their Facebook pages. Now they just have to be loonies too. Normal people wouldn't do stuff like that. And there was another fellow marching along, grinning inanely while he rabbited on about some imaginary business deal. He kept saying "yeah, yeah, yeah" like a loony at the back of a village church in the early sixties.