"Guardian" newspaper Interview with Bill  Bryson
Q. Is it better to give or to receive?
A. Depends on whether you are talking about Christmas or gonorrhea. 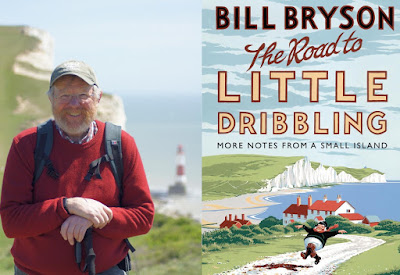 It has taken too long but today I finished "The Road to Little Dribbling" by Bill Bryson. My daughter gave me it for Christmas and I knew that I would love reading it, twenty five years after Bryson produced "Notes from a Small Island". Both books are opinionated travelogues that focus on my country from the point of view of an American  mid-westerner.

Though there's annoyance and frustration, there's also laughter and enormous affection for his adopted country where he married and with his English wife Cynthia raised four children. He travels to places that are familiar to me and observes many things that I have seen.

Rather than banging on about the book and boring you all to death, I will just give you a few quotations from it that perhaps capture something of the spirit of his writing and of his affection for Great Britain:-

“There isn't a landscape in the world that is more artfully worked, more lovely to behold, more comfortable to be in, than the countryside of Great Britain. It is the world's largest park, its most perfect accidental garden.”

“What a joy walking is. All the cares of life, all the hopeless, inept fuckwits that God has strewn along the Bill Bryson Highway of Life, suddenly seem far away and harmless, and the world becomes tranquil and welcoming and good.”

“England?” she said with unreserved amazement. “Why do you live in England?”
“Because it is nothing like Indianapolis.”

“That is the problem with Scotland, I find. You never know whether the next person you meet is going to offer you his bone marrow or nut you with his forehead.”

I am an unashamed Americophile as I have stated before in this curious blog, It's funny but the four living male Americans I admire the most all have first names that begin with B... Bob Dylan, Barack Obama, Bill Bryson and last but not least - Bob Brague.
- June 11, 2016