On Thursday, Britain's polling stations will be open. Regarding our membership of The European Union we will either put crosses in the "Remain" or "Leave" boxes or draw a cartoon... possibly of a sheep.

It is not entirely clear why we are even having this referendum. I guess it came about because of anti-European rumblings in the ranks of the Conservative Party. Having the referendum was meant to appease all those "Daily Mail" readers. I saw their leader on the television last night - David Cameron. He was fielding questions from members of the public and he appeared to be floundering. He looks older, less bullish, unconvincingly trotting out the same, tired arguments.

There are things about The European Union that baffle me and most of my fellow citizens. What began as an economic trading alliance appears to have morphed into something different. It is a political juggernaut which seems to have an uncontrollable momentum of its own, like a prehistoric brontosaurus stomping over our continent. In Brussels and Strasbourg, highly paid Eurocrats congratulate themselves about their cleverness and importance. 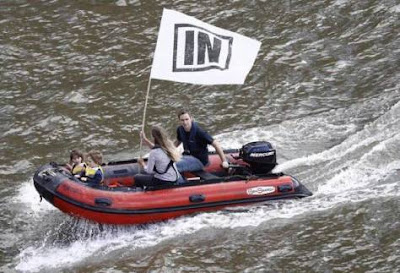 I am drawn to "Remain" but I wish that the champions of "Remain" would talk about the reforms they intend to press for. Many of them try to avoid the "i" word - immigration. It has become a huge concern to ordinary Britons. Many communities are utterly changed. To me, it is not just an economic matter. Not everything is about jobs and balance sheets. I used to live in a country where everybody knew what a maypole was, where everyone knew that a 99 was a vanilla ice cream  with a "Flake" pushed in it, where we all knew the most popular Christmas carols, where we knew what the years 1066 and 1666 meant to our people. It's not like that now. And if you dare to dig into immigration matters you are likely to invite accusations of racism and intolerance.

Nonetheless, it's "remain" for me. "Leave" is filled with uncertainty and its champions are dangerous dorks with whom I have no affinity - Boris Johnson, Nigel Farage and Michael Gove for example. All odious ego trippers.

In contrast, our lovely Yorkshire rose, the murdered MP Jo Cox was strongly behind the "Remain" campaign. Only the weekend before her cruel death, she was pictured in an inflatable dingy on The Thames with her husband and small children and as it sped mischievously through the choppy waters near The House of Parliament its large flag fluttered in the wind, bearing a single word - "IN".

Nobody knows what the outcome will be or significantly what percentage of the electorate will even vote but in  memory of Jo Cox, for stability and togetherness I shall be giving "Remain" my cross. We have come so far in The European Union that "Leave" seems far too drastic and it increasingly looks like the gateway to Narnia.
- June 21, 2016