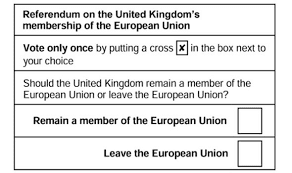 It's a hot, overcast day and I have just come home from the local methodist church which acts as our neighbourhood polling station. You can see the ballot paper above. I put my cross in the "Remain" box.

I don't know if any studies have been done into the psychology of voting habits vis-à-vis the order of choices on a ballot paper but I would guess that it is advantageous to be at the top of the pile. On this ballot paper, "Leave" looks like second best but if normal alphabetical ordering had been employed, "Leave" would have been imbued with primary status.

This is important as up to yesterday, many thousands of voters had not made up their minds. Some even said that they would decide at the polling station.

Another thing I am thinking about this referendum is that "Remain" appears like a vote for the status quo whereas "Leave" seems more rebellious - kicking against the system and there are many people in our society who are drawn to that kind of response. I should know because I am normally one of them.

It will  certainly be interesting to see how things pan out as the votes are counted through the night ahead and into tomorrow morning.
- June 24, 2016