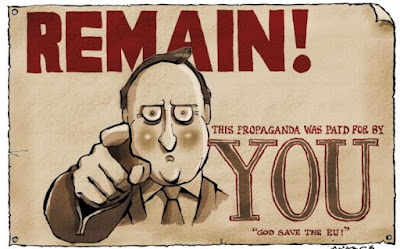 A bunker, deep below Downing Street in the heart of London. Dressed in his military fatigues, including an old World War II helmet, David Cameron is chairing an emergency meeting of the Brexit "Remain" steering group. He  points his swagger stick at the whiteboard.

CAMERON We need new suggestions and we need them fast. As you can see our strategy isn't working. The "Leave" camp are gathering strength.
OSBORNE Shall I tell the country that all savings accounts will be frozen by The Treasury in the event of a Brexit? We will need that money for the barbed wire and the extra CCTV cameras.
THERESA MAY No way George! You would be best keeping a low profile because whatever you say seems to push the swingometer in the "Leave" direction. Just keep schtum.
CAMERON I am at my wit's end. Every bloody day we have had influential figures lined up to support "Remain" - from Mark Carney to President Obama, from The Chairman of the CBI to The Archbishop of Canterbury. But it isn't working.
CLEGG Perhaps we should call on more populist figures.
ALAN JOHNSON David Beckham? Katie Price? Ed Sheeran? Michael McIntyre?
THERESA MAY But they are all for leaving Alan. How about Rosamunde Pilcher - she's my favourite writer you know!
ALAN JOHNSON But she's ninety four years old! And besides you could hardly call her populist!
(Doris Budd who has worked in the bowels of  Downing Street for thirty eight years comes in with the tea trolley. She is humming "Stairway to Heaven" by Led Zeppelin).
DORIS Is it your usual Mr Cameron?
CAMERON Yes. Piss weak Darjeeling with a slice of lemon and a garibaldi.
THERESA MAY Have you got any ideas Doris?
DORIS What do you mean your madame? About remaining?
THERESA MAY Yes.
DORIS Well, I've thought about this and your only chance is to use your best asset.
OSBORNE You mean me?
DORIS Don't be silly. No. I'm talking about Her Majesty. The Queen. Get her to do a broadcast in the middle of every soap opera urging... no instructing her subjects to remain.
CLEGG But The Queen is impartial.
DORIS (pouring) Jasmine green tea Mr Clegg and a bourbon?...I know she has always sat on the fence over just about everything but this is different. Besides if you don't do it Britain will be out of The European Union.
CAMERON Excellent idea Doris. But who will write the script? Put your hand down for heaven's sake George. It won't be you.
OSBORNE It's not fair!
ALAN JOHNSON Then who? I am a bit of a wordsmith. Did you read "This Boy"?
CLEGG It was too literary. I think you've lost the common touch Alan.
(All eyes turn to Doris who is now pushing the tea trolley towards the door.)
DORIS What? Don't look at me. I'm leaving.
CAMERON But I can phone Briggs, tell him you'll be staying with us for a while. He won't mind.
DORIS No. You don't get me prime minister. I mean I'll be voting to leave. I'm a Brexiter. (A hush falls over the bunker) Another biscuit before I go anyone?  How about a custard cream or a ginger nut? 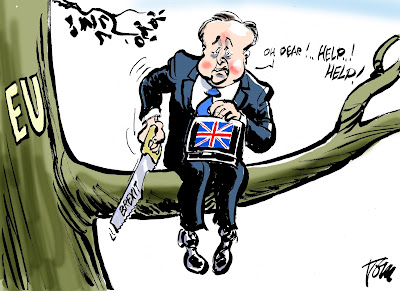