In a corner of our dining room, two old friends have been waiting for me. I have neglected them for far too long. They are classical acoustic guitars.

I bought the oldest one was I when fifteen years old - using wages I had earned on a local turkey farm. I must have bought the second one around 1990 - from a guitar specialist who had an Aladdin's cave of lovely instruments just outside Leeds. 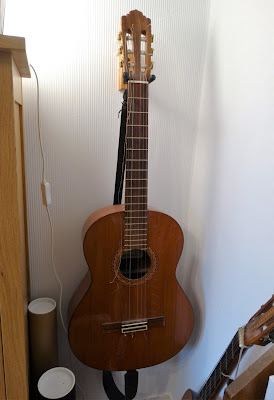 How many hours have I spent plucking and strumming these guitars? Thousands. But since I retired from teaching, I have hardly touched them. All this extra downtime - you might have thought I would have been consolidating my musical talents, practising most days - but no, the guitars had become ornamental. It's a psychological thing. You have to be ready.

A few months ago, one of the strings on the newer guitar broke of its own accord but it was only yesterday that I got round to restringing it. I tuned it, played it and retuned it. It takes a while for new strings to settle down.

Please don't imagine that I was ever a great guitarist. For me, the guitar was always something I used to accompany songs - or better still to create songs. This was something I was pretty good at and the feeling you get when playing a guitar and singing a song that you have penned yourself is very special. You feel lifted somehow - as if the song has come to you mystically, magically, as if it is bigger than you. You can easily get lost in it.


Anyway, in my current frame of mind I am now determined to embrace my old friends again. I plan to play the newer instrument regularly - make my fingertips hard again, make my fingers re-learn old chords. And I want to make some new songs.

If it is okay with you, At the risk of making a rod for my own back, I would like to share a couple of these unborn songs with you before this year is out. That target will increase my motivation because when all is said and done what is a song without an audience? It's like a play or a painting - without witnesses it might as well not exist.

Now I am going upstairs for a shower and before walking down for my weekly shift at the Oxfam shop I shall play the guitar for half an hour. It will be a long road back to proficiency but it is a road I am ready to travel.
- June 16, 2016