Over the Rivelin Dam wall and across the A57 Manchester road. Then along a winding path that led beneath birch trees. It was fringed with new bracken, burgeoning green. After ten minutes, Rivelin Rocks began to appear through the trees. As luck would have it, my chosen track took me straight to a millstone pinnacle called The Rivelin Needle. Here you can see it towering above the trees. 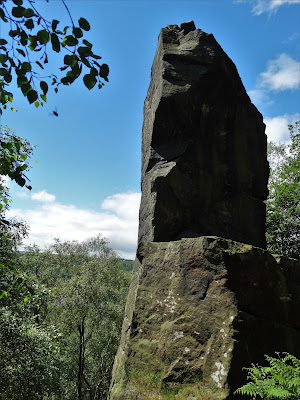 Two young men had just finished climbing it. One of them was Swedish. They had several ropes, clips and steel carabinas. I talked with them for a little while and then headed further along the rocks where I encountered two young climbers from Barnsley tackling a route called Auto da Fe. Apparently there are 242 defined climbing routes at Rivelin Rocks. 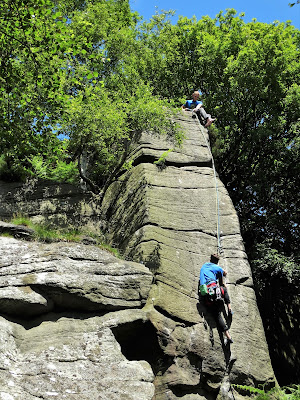 It was a challenging climb. The young man on the bottom end of the rope was struggling to find hand and footholds he could have faith in. I sensed his uncertainty though his friend at the top had already mastered this particular rock face. 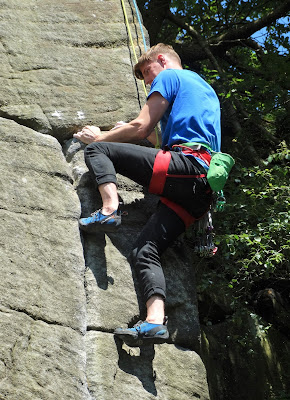 It takes a particular kind of person to fall in love with rock climbing. It never appealed to me but I can appreciate why others might enjoy it. Patience and daring. Muscle and mind. Becoming one with the rock. Even so it is an inherently dangerous activity.

I carried on to a place where I could scramble up to the open fields above Rivelin Rocks. Then I walked along to Ronksley Lane, noticing a brown hare sitting still in one of those summery meadows. It raised its ears like radar receivers and then darted off. After all, not only do we human beings seek danger, we also reek of it. 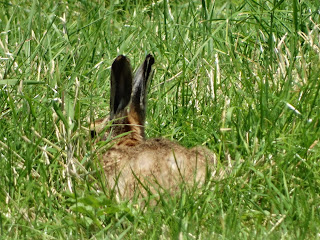