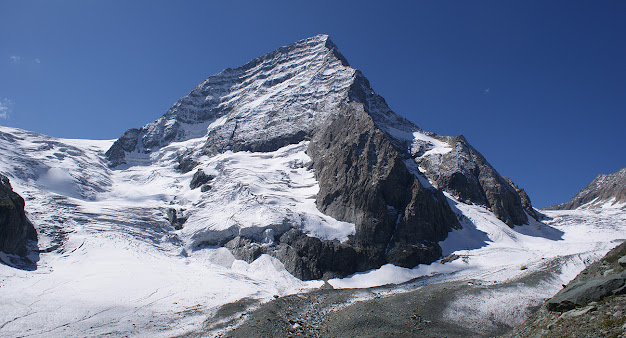 Mount Kolahoi
I have now passed the halfway mark in my labour of love - typing out my father's account of his trek into the Western Himalayas in 1944. 27.000 words typed and around 25,000 to go. This process brings me closer to that young Yorkshireman. It is as if I have tuned in to the frequency of his inner radio station as he selects and moulds his words. Visitors to "Yorkshire Pudding" have previously shown heartening interest in this rebirth project so today I shall share three further extracts.
1) Animals at the head of the Lidder Valley:-

Higher up the side of the valley we discerned two little animals gazing at us with great attention and since we did not recognise them at that distance, we clambered towards them to investigate further. At a distance of some ten yards we stopped – not wishing to scare them. Their skins were a chocolate brown on the back with a lovely, creamy yellow tint on the belly. In size they were somewhat larger than English rabbits but rather like them in appearance as they sat up on their hind legs and washed their faces keeping a wary eye on us through their claws. They did not seem in the least perturbed by our presence and most certainly did not show any real signs of fear. There they sat with a sort of grin on their faces, their ears cocked and their tiny front paws weaving endless patterns abound their muzzles.

Having read that marmots were common in the area and remembering that the description given of this cute little animal tallied with what we saw in front of us, we came to the conclusion that these little denizens of the rocky vastness of the mountains must indeed be marmots. Stealthily, we edged nearer and nearer hoping that we might even take hold of one. However, when we were five yards away they just melted into the ground. One second they were there and the next they had gone – vanished in a flash to their wee burrows beneath the rocks. We searched for a short while but futilely for there was not a trace of their whereabouts and so we retraced our steps and in a short while reached the very foot of the glacier’s remarkable snout.

2) On the Kolahoi Glacier:-

We were surrounded by a vast silence broken only by the occasional crump of an avalanche or the crash of falling ice. This quiet was almost beyond description – as if there was something missing from the alien world that now surrounded us. There was not even a breath of wind to create a faint rustling as it passed our ears. Neither animal nor bird disturbed the peaceful silence and the familiar roar of rushing water was now drowned by distance. Even our footfalls were muffled by the plasticity of the ice on which we were walking. On all sides, the gigantic rock and ice peaks hemmed us in as, hand in hand,  grandeur and silence reigned supreme.

3) Beyond the glacier heading up:-

From the moraine we climbed easily upward for roughly a hundred and fifty feet. We gripped grass and flowers to help us in our passage. Many of the weeds were of the sage variety. When they were crushed in our hands they emitted a rich and fragrant scent. Intermingled with the scents of the many alpine flowers, the aroma of these tough little shrubs made another pleasant element in our climb. Eventually, we reached the end of the easy section  and were confronted with a cliff of rock twenty feet high which appeared to end in a ledge. A careful examination  of the slopes to left and right did not give us a clue to an easier route and it seemed that there was nothing else to do but to try our skill on the rock face. Oh for a sixty foot alpine rope!

There  seemed to be a dearth of finger and toe holds in the next twenty feet and the drop down to the moraine did not look too enticing. However, putting all thoughts of failure from our minds, we started upward once more. I remember that I stared hard and long at the rock and worked out every detail of the cracks and knobs I was going to use and where I was going to place my fingertips and my toes and in what sequence I was going to use them. Try as I might, I could not see a way of covering the last three feet to the ledge. Trusting in the belief that a closer view would surely reveal something, I placed my toe in the first crevice and took a firm grip  of a knob of rock just within reach above my head and levered myself up.