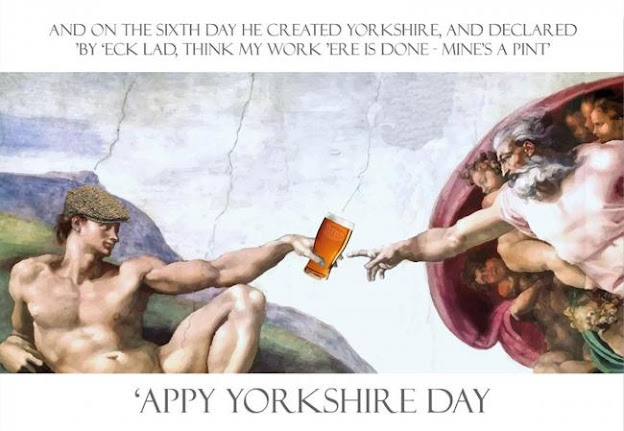 Our Yorkshire Day feast was also our Sunday dinner. Frances, Stew and Phoebe came over and as they relaxed in the front room with Grandma I sang every verse of "On Ilkley Moor Baht 'At"  in the kitchen. Let me translate that title - it means "On Ilkley Moor Without a Hat". I must confess that it is a pretty silly song but I like singing it all the same. I once sang it in a bar in the middle of Ohio as startled Americans gaped open-mouthed at the madman in their midst.

At the centre of the feast was a joint of best Yorkshire beef. This I surrounded with crispy roasted potatoes, green beans, roasted carrots and cavolo nero. Of course there was homemade beef gravy but the pièce de résistance was a large Yorkshire pudding that I made in our new roasting tin. It rose like a golden phoenix and in spite of my slight  anxiety there was no adherence to the tin whatsoever. I cut the beauteous offering  into four.

We drank Italian wine and Yorkshire beer and Shirley made a chocolate pudding for dessert. She is the only one of us who was not Yorkshire born and bred. I may not have mentioned this before but I am in a mixed marriage. She hails from Lincolnshire though she has lived in God's own county for the past forty five years.

After dinner, I carried Little Phoebe up the garden to touch leaves and observe the greenery. Her eyes follow you around now and she laughs readily. She can roll over on the floor and has good head control. Ten days ago she began the messy business of weaning and when she is in the mood she will grab her spoon and swallow what is on the end of it.

She is not the helpless babe she was in the weeks after her birth. She listens to stories and she is fascinated by the television. Nappy (American: diaper) changes are less frequent. Phoebe is a happy, healthy and heavy Yorkshire baby - not one of those skinny plucked chicken kind of babies that you see in London parks - being pushed around by their nannies.

When F.S.&P.  had gone home, I watched the seventh episode of the fourth series of "The Handmaid's Tale". Though the acting, cinematography and music remain first rate, the script is stretching credibility and I am astonished that a fifth series has been commissioned. It's a bit like milking a cow till there's not a drop left and then milking it some more. Shame really because I loved the first three series of this dystopian tapestry.  Sometimes you need to know when to draw the line.