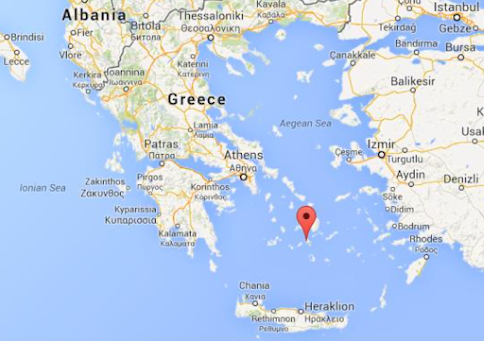 Map to show the location of Ios
....Fishing boats failed to appear and sunset was approaching. I was beginning to think that I would have to spend the night there with the rocks and sea waves breaking gently on the pebble beach that had become my prison. Fortunately, the cove faced west and I had my little shaving mirror with me. It had a diameter of perhaps three inches and sat in an orange plastic circle.
At about 7.30pm with the sun sinking low, I heard and then saw a little fishing boat, hugging the coast about three hundred metres off shore. Perhaps I wouldn't have to spend the night on the beach after all! I waved my T-shirt and shouted "Help!" at the top of my voice. Then I aimed the little mirror at the boat and the sinking sun beyond it. Jiggling the mirror ever so slightly I hoped that I would occasionally be reflecting the sun.
The boat moved between the two headlands - from left to right then disappeared. I was utterly dejected, believing that the fishermen had not spotted me but then the boat came chugging round the headland and I knew they were coming to my cove. They had seen me after all! I was saved. Rarely in my life have I known such relief.
Even though they only spoke a few words of English between them, I gathered that the three fishermen on board the simple blue and white boat were heading out for a night's fishing.  For several moments I thought I was going to have to spend the night with them and on a different occasion a Mediterranean moonlit fishing trip would have greatly appealed to me but that night I was hungry and had the thirst of a camel though they kindly shared some of their water with me.
As we passed it, I pointed out the beach that I had tried to get to that morning before indicating that I could walk back "home" across the island. They turned into the shore where I tried to give them money - "For bira, for retsina". They wouldn't take it so I shook hands with the the three of them and said  "ef karisto" (thank you) a dozen times or more. The skipper pointed out the rough track I would need to take to get back to Ios Town.  Though it was now nighttime, the vestiges of the day and the rising moon provided enough light to illuminate my  three mile trek.
I stopped at a well to drink from a wooden bucket and later stole a bunch of sweet grapes from a remote allotment. How lovely they were.
Once back at the port of Ios, below the main hill town, I went into the first taverna I reached and bought a 1½ litre of table water and a bottle of beer. After downing all of this liquid in thirty seconds or so,  I ordered a traditional Greek meal - fried egg and chips! It was so good and only cost me 65 drachmas.
Suitably refreshed, I walked back to Sunset or Koumbara Beach to sleep. Silver moonlight was now sparkling on the waves - such a beautiful sight to behold. I wriggled into my sleeping bag  feeling comfortable and just glad to still be alive when I heard a rustling behind me in my beach shelter. I grabbed my torch and twisted round and that is when I saw  - the rat! 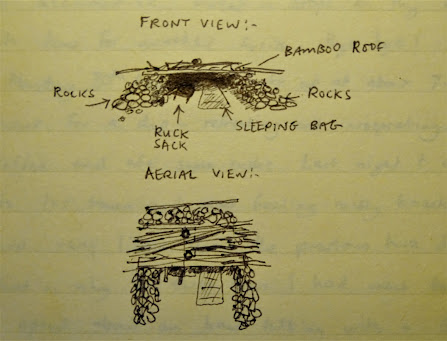