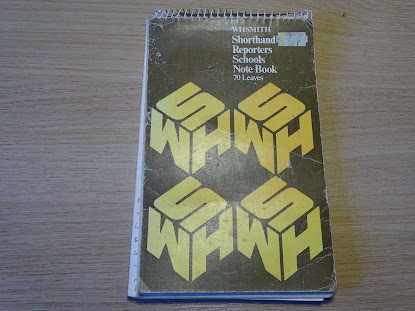 Stuff tumbled from the lower shelf of the big pine bookcase in our study. Sorting through the mess, I discovered things I had forgotten about, including travel journals. Amongst them was a diary from the summer of 1982.  I have blogged about what happened before but today I rediscovered the words that I wrote at the time in the very W.H.Smith notebook shown above...

There were no paths. I just guessed where the beach would be. I slid down the cliff and to my dismay found I was probably in the wrong place. There was only a small pebble beach and rocks.

Anyway, I decided I would make the most of it. I swam and sunbathed, read my book and drank my water till around one o'clock when I chose to leave that lonesome place.

In the hot afternoon sun, I struggled back up the cliff but when I was about fifty feet up with rocks below, I slid and slipped down about ten feet. Now glued to the crumbling cliff face, I trembled with apprehension and it was a couple of minutes before I was calm enough to slowly descend. In that moment, I did not have the appetite for a second ascent.

Coming down had been easy enough. I had not imagined that I'd have a problem going back up when I wanted to leave the little cove. Later, I attempted to leave by different routes - right and left of the beach but after initial success I met with sheer cliffs. I had my blue backpack with me containing passport, money and air ticket etc. so swimming out to sea and round the headland seemed out of the question.. Besides, I was tired from all the swimming I had done and my three failed  attempts to scale the cliffs and get out of there.

I found some shade in the lee of a big rock that must at one time have been dislodged from the cliff. I rested for an hour, regathering my strength and  feeling increasingly  thirsty because I had finished all my water a couple of hours before.

I tried yet another scrambling route but the same thing happened as before - the rocky 60° slope crumbling under my hands and feet as I tried desperately to gain purchase. Then I asked myself a question: if a fishing boat passed by would I try to signal for help ? My internal response was a resounding "Yes!" for I knew that I was now in a very dangerous situation.

I was by now weak and dehydrated - it must have been around five in the late afternoon. Again I rested. There were no boats passing by so in desperation I tried another route up the cliff. But this last effort was just like all the rest - useless. If I fell onto the jumble of large rocks below I could die either instantly or more likely a slow death caused by the injuries I would sustain and the lack of water. There was no doubting that.