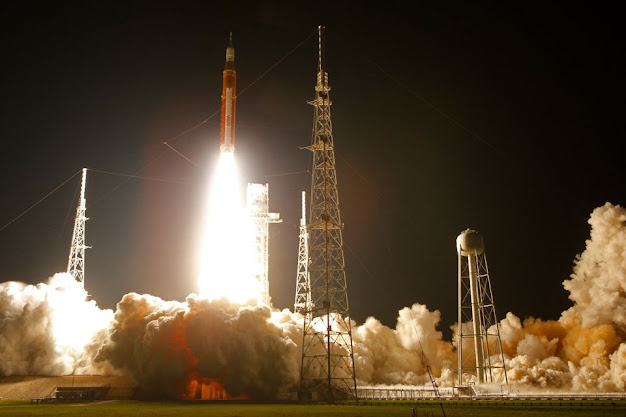 ©Reuters 2022
TV News keeps reporting a significant new space project devised by NASA and funded by American taxpayers to the tune of $93 billion by today's estimates. No doubt as years pass by that figure will increase exponentially. Vaguely interested in what this project is all about I read up about it on Wikipedia and also read an opinion piece from "The Observer" newspaper. It was headed thus:-

The Observer view on the Artemis deep space project: $93bn? Worth every cent

...and this was the concluding paragraph:-
Anders, Armstrong and the other Apollo astronauts had a profound impact in changing our perspectives of our world. Their observations and experiences underlined the fragility of the Earth and played a key role in the birth of the environment movement in the late 1960s. From that perspective, lunar travel can be seen to have provided value for money and suggests there is still something to be gained from continuing to put men and women into space. Working out the exact price tag is more problematic but the placing of human beings on the surface of another world should be looked at as an act that is generally beneficial to our species.
Most happily, I question several of these remarks - clearly made by a space enthusiast. For example, I am flabbergasted by the suggestion that the Apollo astronauts played a key role in the birth of the environment movement! The so-called environment movement goes back much further in time than the 1960's and also there are many who would argue that space missions have generally been very unfriendly to the environment. They burn up precious fuel and leave masses of debris floating around in space. And why should we accept the assumption that space missions such as Artemis are "generally beneficial to our species"?
Perhaps they are the opposite, taking focus away from the many issues that beset us here on Earth. We could do so much direct good here in our troubled world with $93 billion.
Anyway, when they build the moon station with its little rough terrain buggies, spacemen and spacewomen will be able to collect plenty more lifeless grey dust. Furthermore, when they make a similar community on Mars, they'll be able to collect lots of lifeless red dust.
And I'm sorry but those buckets of dust and all those scientific observations will not put food in children's bellies nor tackle climate change nor find a cure for malaria. To me it all seems like a massive distraction but no doubt NASA, space enthusiasts and countless scientists in an array of universities around the world will continue to promote the notion that it is all for the good of mankind and only ignorant fools like yours truly would dare to question their holy mantra.
- November 25, 2022