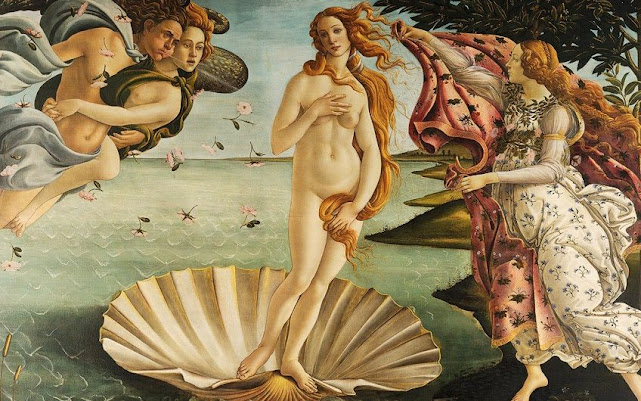 Something beautiful today. It's "The Birth of Venus" by Sandro Botticelli. He painted it in Florence, Italy when he was around forty years old. That would have been in the mid-1480's. The exact year is unknown.

The painting is on canvas which probably indicates that it was not intended for public display. Almost certainly it was commissioned by a member of the powerful and wealthy Medici family. They were great patrons of the arts.

Botticelli did not pluck his plans for this painting from thin air. It reflects many things about art in the Early Renaissance period and harks back to classical mythology from both the Greek and Roman eras. Botticelli was well-informed.

Venus is the Roman equivalent of Ancient Greece's Aphrodite. She was born out of the sea fully formed and appears upon the shore on a gilded clam shell where three figures await her. To the right there's one of the goddesses of the seasons or "horae". This goddess is clearly connected with springtime and she is holding out a cloak with which Venus may hide her modesty. To the left there's the Greek god Zephyr who has blown Venus to the shore. He is possibly accompanied by Aura - a goddess associated with breezes.

Venus's body is somehow elongated and she stands unnaturally in a pose we might associate with classical representations of the female form in Greek sculpture.

The left of the painting is lighter than the right and the sea stretches out far behind Venus giving the composition a strange depth.

Much has been written about "The Birth of Venus" and what I have said here is but the tip of an iceberg of investigation, speculation and appreciation. This priceless work of art is housed in The Uffizi Gallery in Florence where I  stood before it in slack-jawed awe in February 2007. 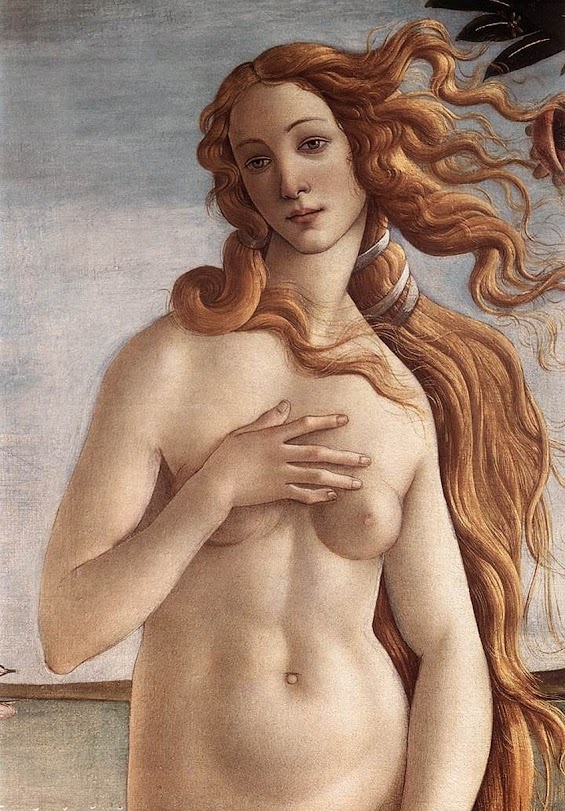