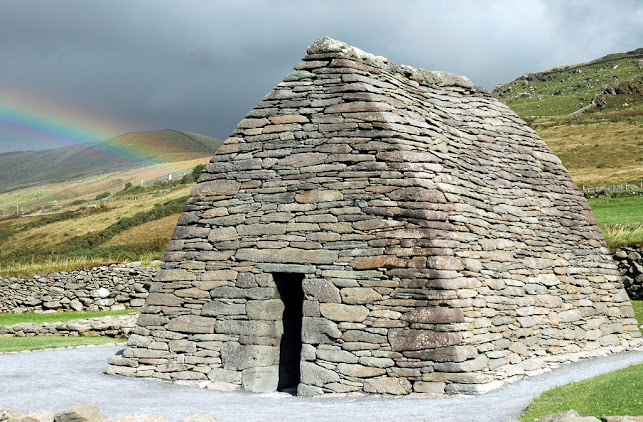 In the summer of 1974, I made a grand tour of Ireland. It took me six weeks. Mostly I slept in the tent that I carried upon my back but sometimes I shelled out for youth hostels and three or four times I paid for B&B accommodation. I got around by simply walking or hitch-hiking. I didn't have much money.

I remember reaching The Dingle Peninsula in County Kerry and though I don't recall my exact route, I left  the town of Dingle, heading north for two or three miles. That's when, purely by chance, I came across the structure shown above - Gallarus Oratory.

This enigmatic building was more or less overlooked by scholars until the mid-eighteenth century. It is likely that it was once  a simple church - exquisitely built perhaps as early as the tenth century. It may have been part of a monastic settlement.

I was alone but then I saw another figure tramping along the lane. He was a Canadian visitor - also a university student of a similar age to me. I don't recall his name but we shared our reactions to the oratory and I remember he became my intermittent travelling companion until we reached Cork City in the next county.

It was a balmy summer. I hardly felt any of the rain that gives The Emerald Isle its name. This was the first time I had ever visited Ireland and I loved it. Though it was just next door to the island of Britain, it seemed so different.

The people spoke English but they were different from the English. They appeared to have more time for strangers and were arguably more attuned to ancient notions. At least it seemed that way. One-upmanship was pointless and they enjoyed the "craic" - people getting on happily with each other.

I still have many memories of that tour. They endure after almost fifty years and one of them is of my unplanned visit to  Gallarus Oratory - so perfectly constructed, like an overturned boat made with carefully placed  stones - like a 3D jigsaw puzzle.