One of the nicest Christmas presents I ever received was just last year. It was from Shirley, Ian and Frances. Beneath the Christmas paper was a shoebox and within the shoebox a smaller parcel and so on until I got down to a homemade cardboard camera - Frances has always been creative like that. I looked at it in puzzlement and had to be told to take the back off this fake camera. Inside there was a large wodge of crinkly banknotes. I was still baffled.

"It's so that you can buy a new camera!" they announced.

Well, there wasn't really time to do the necessary research before we jetted off to the land of the long white cloud so I did it when we got back. The only trouble was that because of the floods in Thailand last year, production of some key components for Nikon cameras was halted. Consequently, the camera I had earmarked was "out of stock" everywhere I looked. However, in the last week or so, stocks of various Nikons have been partially replenished.

So this morning I went toddling off to the great shopping cathedral on the edge of our illustrious city - the massive Meadowhall complex - and came back with this baby:- 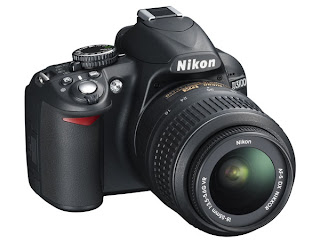 It's still in its box - and typical of these times - there were add-ons I needed. The extra battery. The camera case. The suitably fast memory card. The extended insurance. I baulked at the idea of an extra lens. Anyway, the baby has arrived and now I have the challenge of coming to terms with the technical wizardry that will be at my fingertips if I can only figure out how to exploit it. Who knows - maybe tomorrow I'll snap some daffodils if the grassy bank I am thinking of is in full bloom. We'll see. Gonna call the baby Cyclops because it only has one eye.
- March 15, 2012