Last night we had a lovely meal at the nearby "Kitchen" restaurant on Ecclesall Road. It was Shirley's fifty somethingth birthday and Frances managed to get back from Leeds to join us. One of the waitresses goes to Shirley's "Zumba" exercise-dance classes and the other was in Frances's class at primary school. I hadn't seen her since she was eleven years old.

"Kitchen" is a snug little establishment but the food is delightful. I had chicken liver terrine with various tasty accompaniments, a medley of fresh fish with garlic potatoes and fresh greens followed by a tower of meringue, cream and soft fruit. Mmmm...

Later in the local pub I was given this twenty pence piece in my change. Please note - the image is magnified. British people don't stumble around with their pockets weighed down by massive coins. As you can see, it is a Falkland Islands twenty pence piece with our beloved monarch on one side and my pet sheep Beau on the reverse. Seems that the Falkland islanders revere Beau like a goddess. 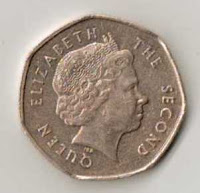 Roger, the pub's landlord, thought it might be interesting if all coins had chips in them and we could follow their movement on the internet. If this particular coin could speak, its journey might be worth hearing about. Was it brought back to England by a soldier? Had it crossed the counter of  "The Capstan Gift Shop" in Stanley, the small capital of the islands. Was it tossed to settle a dispute? I don't remember ever being given a Falklands coin in change before.

This little outpost of our former empire is 8,000 miles from England and, by the way, over four hundred miles from envious Argentina which mischievously likes to call these islands The Malvinas. They were in British possession long before Argentina was even a country and they were never inhabited by Argentinians. Apart from soldiers and other military personnel on tours of duty, the Falklands has a permanent population of only around 3,000 people. They can't have many twenty pence coins in circulation can they? Perhaps I should send it back and I guess I might do were it not for the image of Beau.
- March 24, 2012