I must go down to the sea again, to the lonely sea and the sky,
And all I ask is a tall ship and a star to steer her by,
And the wheel's kick and the wind's song and the white sails shaking,
And a grey mist on the sea's face, and a grey dawn breaking.

I must go down to the sea again, for the call of the running tide
Is a wild call and a clear call that may not be denied;
And all I ask is a windy day with the white clouds flying,
And the flung spray and the blown spume, and the sea-gulls crying.

I must go down to the seas again, to the vagrant gypsy life,
To the gull's way and the whale's way, where the wind's like a whetted knife;
And all I ask is a merry yarn from a laughing fellow-rover,
And quiet sleep and a sweet dream when the long trick's over.
By John Masefield (1902)


Some poets write in a sort of academic and intellectual isolation - divorced from the real world. Others are very much involved in the hurly burly of their societies, acquiring experiences that nourish their writing. You might say that these latter poets are at "the front line" while the former are in field camps set comfortably well back from the action. I  note with approval that as a very young man John Masefield sought adventure at sea. Perhaps he was escaping from the disappointments of his childhood - the deaths of his parents and his unhappy schooling in Warwick - but anyway  he worked aboard transatlantic trade ships, mingling with rough and ready mariners.

As he looked out, he wasn't just imagining the sea, he was experiencing it firsthand and it's that genuine feeling for the sea that marks this poem - written when he was still only twenty four. It's like a lot of his poetry - accessible, clear and a little predictable - rarely appearing to wrestle with slippery esoteric notions or to dance on undercurrents of meaning. What you see is what you get with Masefield. Some have said he was more of a storyteller than a poet but in his day he was feted as a poet on both sides  of the Atlantic, becoming Britain's Poet Laureate in 1930 - a position he held until his death in 1967. 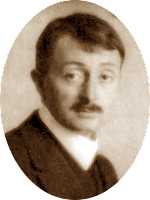