I wouldn't have wanted to die young - especially during a conflict I didn't even understand - where the enemy were as impossible to identify as their cause. Yesterday, six more young British soldiers died tragically and unnecessarily by a dusty roadside in the heart of Afghanistan. They were blown to smithereens by a Taliban bomb.We don't even know their names yet but they have taken Great Britain's death toll there to over four hundred and for what, for what? The politicians who put them there  eleven years ago had no clear idea what they were trying to achieve. It was a knee jerk response to the inhuman attacks of 2001 on New York's Twin Towers by terrorists who in fact belong to no particular nation - not Afghanistan, not Pakistan, not Switzerland - nowhere. There has been far too much mythology in all of this. If young men must die in warfare then they should die for causes that are noble and meaningful. What is happening in Afghanistan is just a very expensive mess that seems to be causing more problems than it is solving. So I say once again to anybody who might be listening -

BRING OUR BROTHERS HOME!
And here's Edward Elgar's "Nimrod" from the Enigma Variations - played in Whitehall, London, every Remembrance Sunday. Now it's for the six working class families left distraught, for those young men's friends and for the hopelessness of it all:- 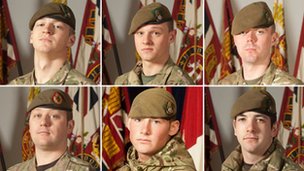 The five youngest soldiers all belonged to The Yorkshire Regiment. Sergeant Coupe belonged to the Duke of Lancaster Regiment but much more important than those military allegiances they were above all sons, grandsons, brothers, nephews, lovers and friends. Why? Why did they have to die?
- March 08, 2012