Rhyl is a seaside town on the north coast of Wales in what was formerly Denbighshire. I doubt that anybody has devoted a whole blogpost to it before. It has a population of just under 25,000 and was once a favoured holiday destination for industrial workers from Lancashire and the Midlands of England. It boasts a Marine Lake that once had fairground rides and a zoo. Now only the miniature railway survives. The town's most famous buildings were the Pavilion Theatre and the pier - both demolished in the early seventies.


Famous people born in Rhyl include Ruth Ellis - the last woman to be hanged in Britain, serial killer Peter Moore, the international darts player Ted Hankey and Lisa Scott-Lee a former member of a the pop group Steps. Oh, and one shouldn't forget Albert Gubay the founder of the Kwik Save supermarket chain. These are all names to conjure with suggesting that Rhyl could well become Great Britain's next "City of Culture" after that other cultural vortex - Londonderry in Northern Ireland.

Shops in Rhyl include the Sainsbury's mini-market in the petrol station, Home Bargains and the Rhyl Coin and Stamp Centre on Sussex Street in the town centre. It is a shoppers' paradise. 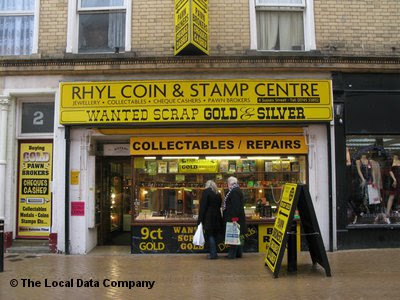 We sent our roving reporter James Murdoch to interview local Rhylians to find out what they love about their quaint seaside town. After half an hour James spotted unshaven Mr John Gray from the nearby historical theme park of Trelawnyd. He was being pulled by a motley assortment of mongrels along West Parade. He said, "F*** off! I don't talk to reporters unless they're called Matt Cardle!" Another day visitor, Ms Jenny Aspin from the border town of Wrexham said, "Sorry I've not time to talk. I've got to get home to watch the Formula One qualifiers!"
So that's Rhyl for you folks. Why not give Rhyl a try some time? It's an experience you'll never forget. If you'd like to know more about Rhyl, why not visit the town's state-of-the-art website. Rhyl - where dreams unfortunately come true.
- March 18, 2012