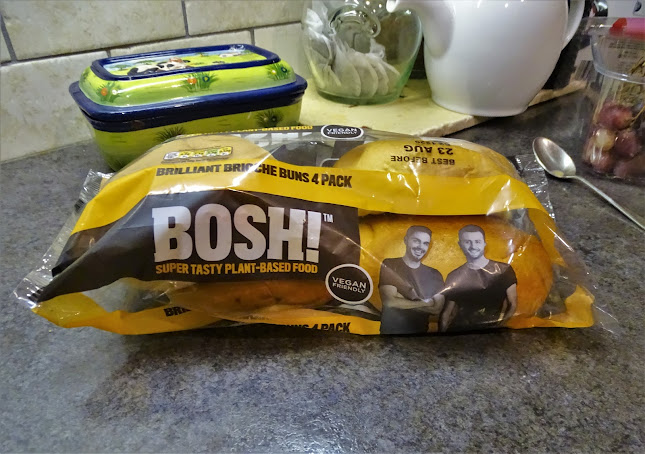 Last evening I visited our local Waitrose supermarket. They have just started stocking a new bakery product - namely vegan brioche buns by "Bosh!" There's our Ian on the right with his old schoolmate Henry on the left. It's the latest thing on the still magical journey that is "Bosh!". No doubt it will end one day - but not yet. Not by a long way.
This very weekend they are one of the headline "acts" at a big vegan festival  near Newark. They'll be selling and signing their books before giving a talk on the main stage about plant-based living. Later they will be DJ-ing - spinning discs and bringing chosen beats and samples together as hundreds of people  dance to their music.
Brioche bread is normally enriched with butter, eggs and milk but Ian and Henry have found a way of mimicking it without dairy or animal ingredients. For our evening meal tonight, we had homemade vegan burgers with lettuce,  tomato slices and vegan mayonnaise inside the new "Bosh!" buns. Though I made them myself  and at the risk of sounding boastful, I promise you that they were great!
Locating the buns in the bakery section  at Waitrose was not easy because a team of  shop staff were stock checking and replenishing the shelves at the time. I asked a fellow with a  clever, hand-held device if he could tell me where to find the "Bosh!" buns. He was both courteous and helpful. His little machine told him that the buns were in stock  so he asked a junior called Alice if she knew where the product would be. She said, "We don't stock Bosh! buns. I have never heard of them."
And then I spotted them on the shelf immediately behind her. There were only two packs left. We all had a giggle about that and Alice apologised saying, "I guess I look pretty stupid after saying that!" I smiled and kept my own counsel. Sometimes that is the best way.
- August 20, 2021