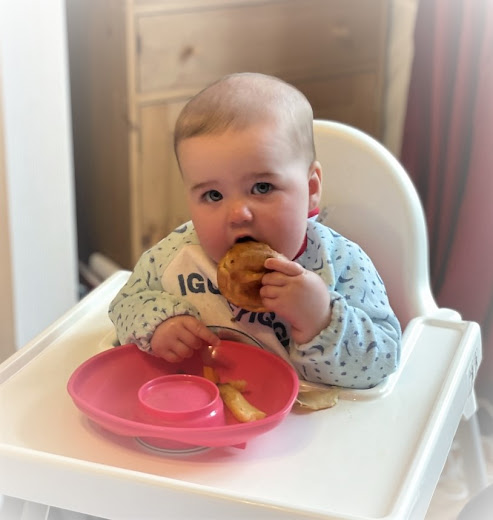 What a nice long family weekend we have had.

On Thursday evening, our Ian came over from Wrexham in North Wales where he had been to visit a big food factory that creates and ships  ready meals for a range of supermarkets. That night we ate some sample vegan ready meals for dinner.

On Friday, Ian's girlfriend Sarah came up from London to Sheffield by train. We picked her up from the station and that night we all went out to a popular vegan restaurant in an old industrial part of the city called Kelham Island.  Baby Phoebe sat at the head of the table like the chairman of the board. She was very well-behaved and the food was tasty too.

Ian and Sarah went climbing on Saturday morning but returned for lunch. I made vegan burgers in "Bosh!" brioche buns with homemade chips (American: fries) and the weather was warm enough to eat out on our decking in the sunshine - something that has been in short supply recently.

Frances attended a friend's wedding in the city centre on Saturday so there had to be a couple of "milk runs" because Phoebe still refuses to take mother's milk from a bottle. Stew made vegan fajitas for dinner. Delicious.

Ian and Sarah spent time with a number of his old friends on Sunday. Though our son is happy in London, he is very fond of his home city and always enjoys coming back. In the late afternoon, I prepared a big vegan Sunday dinner with Linda McCartney "chicken" roasts, roasted potatoes, parsnips and carrots, sweetheart cabbage, runner beans, courgette slices, leeks in a vegan cheese sauce, stuffing, vegan gravy and Yorkshire puddings for the non-vegans which meant everyone but Ian. Even Phoebe had a Yorkshire pudding (see above).

A good while after dinner, Ian, Sarah and I chose a film from Netflix to watch - "Chernobyl 1986". It is a Russian film with dubbed American voices  - in that sense quite weird. The film focuses on brave heroes of Chernobyl who undertook critical safety work under dire conditions. It failed to point any fingers of blame or to highlight the terrible effects that the disaster at Chernobyl had upon the local population and the natural environment.  Even so I quite enjoyed it.

This morning, Ian and Sarah visited a golf driving range but at lunchtime we met up with Stew, Phoebe and Frances again at "The Broadfield". Great food. They do amazing pies but I had fish and chips with mushy peas, tartare sauce and gherkin slices. Very good.

Afterwards Ian and Sarah headed back to London in her car which Ian had borrowed for the drive up to Wrexham. Phoebe was pushed home by her parents and Shirley and I returned to this now quiet house in which I sat down at the "Lenovo" laptop that is in front of me right now.