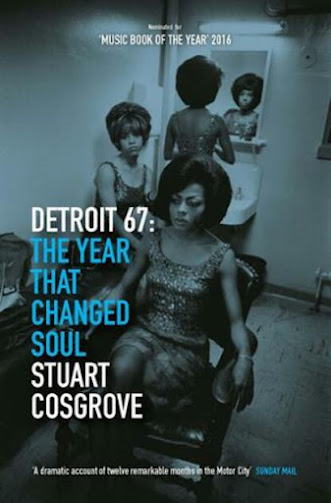 At long last I have finished reading "Detroit 67 - The Year That Changed Soul" by Stuart Cosgrove. 426 pages of  well-researched delving into the true story of Tamla Motown and the city that spawned it.

The book is divided into twelve chapters that take us through the months of  a critical year in Detroit's history, focussing particularly upon the key players in the Motown story - notably Berry Gordy, Diana Ross, Florence Ballard, Marvin Gaye, Stevie Wonder, The Temptations and Detroit's police force.

Stuart Cosgrove, a Scottish academic and music obsessive, tries to make sense of 1967, joining up the dots while looking both back in time and forward.

It has taken me far too long to read and I guess that's because I was  never a big fan of soul music or the Detroit sound. I didn't much care about the in-fighting of The Supremes or the ways in which Berry Gordy sought to manage and progress the phenomenon that was Motown.

This was the book's first sentence: "Berry Gordy's townhouse on the exposed corner of Outer Drive and Monica was trapped in a furious wind tunnel" and this was the last: "It was not the end of the assembly line, but it was never the same again, and in a very real sense it was the end of Detroit's place at the forefront of world music - and the end of sixties soul".

Between those sentences there is a lot to take in and process. I guess I read it all because the book was passed on to me by a friend. There was an element of duty about the time I devoted to it - an estimated sixteen hours spread over several weeks. The next book I shall soon start to read is one I have chosen myself and I have wanted to read it for a long time. I am hoping that it grips me and motivates me to keep turning the pages, over and over again with hunger to know what happened next.