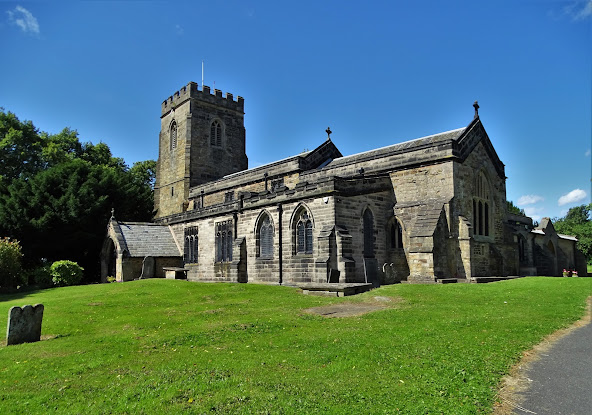 St Helen's Church, Selston - predates the era of coal by several centuries
The small locomotive engine, Number 4, came clanking, stumbling down from Selston with seven full waggons. It appeared round the corner with loud threats of speed, but the colt that it startled from among the gorse, which still flickered indistinctly in the raw afternoon, outdistanced it at a canter. A woman, walking up the railway-line to Underwood, drew back into the hedge, held her basket aside, and watched the footplate of the engine advancing. The trucks thumped heavily past, one by one, with slow inevitable movement, as she stood insignificantly trapped beneath the jolting black waggons and the hedge; then they curved away towards the coppice where the withered oak-leaves dropped noiselessly, while the birds, pulling at the scarlet hips beside the track, made off into the dusk that had already crept into the spinney.
First lines of "Odour of Chrysanthemums"  by D.H.Lawrence (1910)
_____________________________
See above. These were the first lines I read as I began my A level English Literature course at Beverley Grammar School in the East Riding of Yorkshire in September 1970. For some odd reason, I have always remembered that reference to Selston and today I visited the place for the very first time.
I had just driven Frances and Phoebe down to nearby Sutton-in-Ashfield where they met up with Stewart  ahead of a long drive down to Surrey. They are spending the weekend down there with several members of Stewart's family. Our rendezvous was the "Costa" coffee shop by the A38. 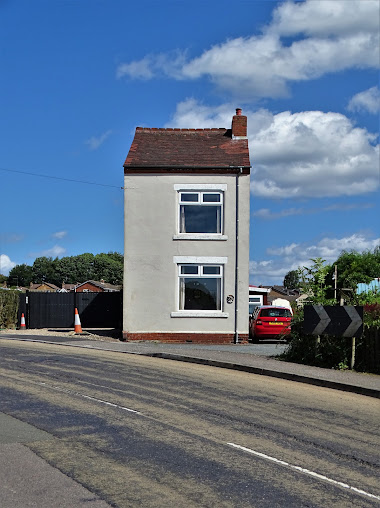 A small, thin house - Mansfield Road, Selston
I expected Selston to be a grim post-industrial mining village which had had the heart ripped out of it by Thatcher in the eighties but it turned out to be quite a pleasant place with many nice private houses along with streets of social housing. The days of coal mining are long gone now and if he could rise from his grave in New Mexico, D.H. Lawrence would hardly recognise "The Country of My Heart" as he once called this corner of Nottinghamshire.
By the way, when Frances was getting the coffees in "Costa", two women - probably a mother and daughter - cooed with delight when I  lifted Phoebe from her car seat.  They commented on her lovely eyes and her general cuteness. As a proud grandpa, I was, as folk will often say in England, "right chuffed". 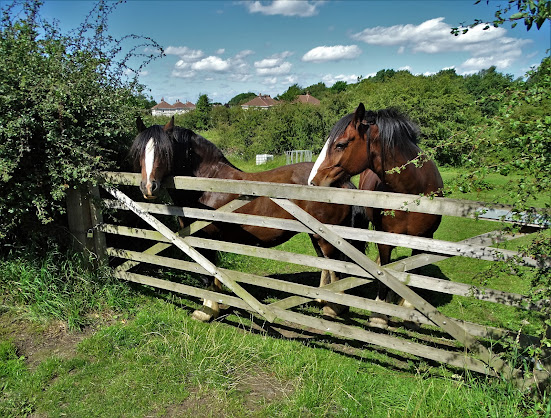