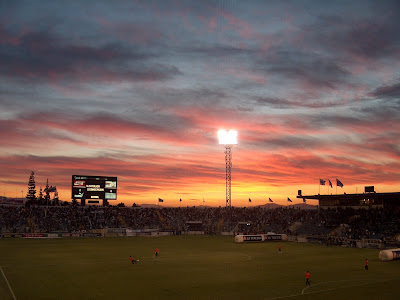 Sunset over the Estadio Universtad Catolica in Santiago
How full these days have been - so many sights, so many photographs, so many memories. A friend of mine called Mick always seemed incredulous when I mentioned travelling solo but I haven't minded one jot. Having spent so much of my life in jabbering word-rich classrooms surrounded by jabbering word-rich colleagues, it is so nice to have peace and self-direction. I have met many people on this trip from Rob the international business intern from New England to nameless travellers and the gang at the Vina del Mar Fishing Club who took me into their hearts - Eduardo, Hernan, Raoul, Orlando, Jeronimo, Patricia, Gina... How we danced and drank there beside the Pacific Ocean with the lights of Valparaiso twinkling in the mid-distance.

Last night I went to see a football match (soccer to US visitors) - Universad Catholica - the champions of Chile - versus Universad Concepcion. The "Cruzados" fans at the other end of the pitch beat drums, chanted and sang their Latin football chants continuously. It was great and Catholica won 4-1 with sweetly taken goals. Bring Juan Morales to Hull City!

I had a strange experience. A co-incidence. On the terraces I spotted a man I thought I recognised. Remember that Santiago is a city of six million souls. Then it clicked. On Monday night I had seen this same man in La Marchigiana restaurant in Mendoza - a city of one million souls. He had been with his wife and four children at the next table. At the end of the match I went up to him and confirmed the fact. He recognised me too - remembering how I had sneezed. I said the chances of us connecting again were thousands to one but he said millions. I often think - what about those co-incidences that we just miss by a hair's breadth?

So I am on this old jallopy of a computer in the reception area of the El Presidente in the Providencia area of Santiago. Time to go up to cosy Room 409 to pack my suitcase. The adventure is almost over but no doubt I will be boring you with it when I get back - hopefully with some photographs too. Adios!
- November 08, 2009