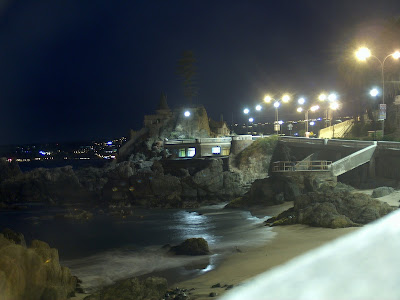 Centre - the fishing club at Vina del Mar
Walking along the promenade that skirts a rocky promontory between chic Vina del Mar and earthy Valparaiso, our intrepid Mr Pudding noticed a pod of pelicans on an offshore outcrop - no doubt settling down for the night. There was much jostling as the birds' pecking order was readjusted.

This was another marvellous photo opportunity. Pudding delved into his navy blue "Berghaus" knapsack and produced the Hewlett Packard digital camera he had purchased two years before. He switched on and the zoom lens automatically protruded with a comforting whirring sound. Click-click-click - images of pelicanos digitally trapped but as ever our hero was dissatisfied. He wanted to get closer to these distinctive littoral creatures.

Up ahead, he noticed steps descending to a lower platform adjacent to the prom. If I go down there I will surely be able to edge along the rocks and get closer to the squawking scoop thought Mr Pudding. However, at the base of the steps, he was surprised to discover that his way was blocked by some kind of a club or office. Down on the terracotta tiled terrace, he was no closer to the pelicans after all.

Staring out on an early evening prospect of Valparaiso, with Pacific waves lapping at the seawall, he noticed words spelled out in relief near the clubhouse door - "Club Pescadores y Aziz de Vina del Mar". Pescadores? Surely that meant fishermen - a fishing club. Just then a figure emerged from the clubhouse door. He was a man of about seventy, short and lean with a healthy complexion and gold-rimmed spectacles.

He appeared to be asking Pudding what he was doing there but as in any awkward situation in Chile, our hero simply announced "No Espanol" and smiled at the inquisitor. For a moment they were both looking at the headland where Valparaiso ends and Pudding muttered "It's beautiful. Buena senor". The short-sleeved gentleman pointed at the clubhouse sign but Mr Pudding simply asked "Cerveza?"
The man relented, frustrated by his inability to communicate and beckoned Pudding into the clubhouse. There were half a dozen middle aged people in there and they appeared to be clearing up - moving accumulated junk out of the back rooms and piling it up near the entrance. An old table tennis table, broken chairs, fading black and white photographs of the club and its members mounted on plywood boards, crates of empty bottles. The old gentleman brought Pudding a glass of ice-cold apple juice which he sipped sitting at a clubhouse table.
Conversation was difficult. English may be the international language but it had struggled to reach this corner of coastal Chile. However, where there is a will there is a way and very soon, our hero was conversing however awkwardly with club members. Eduardo was the name of the gentleman who had accosted him on the terrace - he was the elected "presidente" of the club. A few more members arrived including the naturally comical Raoul who others insisted was their "Benny Hill". Saving the day like the cavalry came Jeronimo or Jerry who had lived in Pennsylvania for twenty eight years. He was to be Mr Pudding's personal translator.
By now it was getting dark, the sun had hidden itself away for another eight hours and nightfall signalled it was time to begin drinking. Out came shiny red cans of "Escudo" beer followed by a two litre carton of Chilean Cabernet Sauvignon. And as Mr Pudding drank with his new clubmates, communication was lubricated and much laughter ensued. Jerry was working hard as a translator - a big man with shovel-like hands and an unnaturally white set of cosmetically enhanced teeth that made him look American - he guffawed like a pirate and shook and squeezed his friends as if physicality was a natural feature of successful social interaction.
Raoul - the mischievous Benny Hill figure - who kept saying "We are your French" - meaning friends - nipped into a store room and came out clutching a large bottle of amber champagne which he insisted the English visitor should open. The cork hit the ceiling creating much amused laughter. "Salut!" was shouted as glasses were clinked and the mysterious visitor from Inglaterra said "Cheers!", "Chile y Inglaterra Amigos! Cheers!" and the glasses were clinked again.
Pudding helped Raoul, Eduardo and the contemplative Orlando to carry that weighty table tennis table up to the promenade where Eduardo's Chevrolet pickup truck was waiting. Then it was back down the steps for more wine and laughter as cooking smells began to emerge from the rear kitchen. Three female members of the club - including Raoul's wife Gina were busy preparing a late night feast.
Around midnight, the feast was served - a delicate chicken stew, warm potato salad, lightly steamed shredded cabbage and a platter of barbecued pork ribs marinated in Raoul's secret and delicious concoction. Then there were cakes and more wine. More "Salut!". More "Cheers!" More "Amigo!" to Mr Pudding who was hugged, squeezed and stroked like a boyband singer let loose amidst his adoring fans.
"Tomorrow!" "Vuelto mañana por la noche!" the last club members insisted as Mr Pudding ascended to the promenade in the early hours. As if warmed by "Ready Brek" central heating for kids, he floated home past the excessive Sheraton with its polished marble and valet parking. The winking lights of Valparaiso were reflected in the ocean, like a harvest of fallen stars. Falling into his bed at the humble Hostal Reloj de Flores on Avenida Los Banos, Mr Pudding smiled about the unexpected evening gone by and drifted into a deliciously deep sleep. 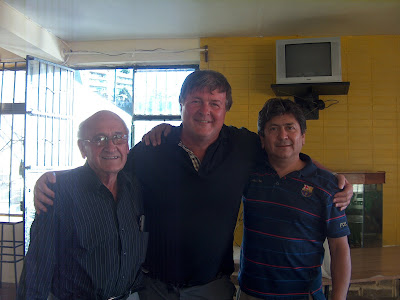