Long ago, a Norwegian TV reporter made a memorable contribution to sports broadcasting when his national team achieved a highly unlikely victory against England. Following Hull City's equally unlikely 1-1 draw with moneybags Manchester City yesterday afternoon, I shall imitate that famous Norwegian moment...
"Elsie Tanner! Noel Gallagher! Bernard Manning! NobbyStiles! Anthony Burgess! Ena Sharples! Gary Barlow! Morrissey! We gave your lads a helluva beating!" Actually it wasn't a beating it was just a draw but to the three thousand Hull City fans packed into the South Stand end of The City of Manchester Stadium, it certainly felt like victory when the inspirational Hull midfielder Jimmy Bullard managed to squeeze his penalty past the flailing arms of Man City's goalkeeper - Shay Given.
Money has been no object for Man City since Arab owners took over the club. Take the Brazilian Robinho for example - he alone cost an estimated £34 million. For such a sum of money you could replace the entire Hull City squad of forty four players twice over! So this was a real David v Goliath match and like David, my beloved Tigers showed far more grit, passion and togetherness than the Goliath club with its cossetted Ferrari driving mob of disunited stars.
And what a laugh it was when Mr Bullard lectured his team-mates in a spoof of last season's infamous halftime team talk by our manager Phil Brown when the lads were down by four goals to nil in the corresponding fixture. On BBC's "Match of the Day", legendary pundit Alan Shearer called it the best goal celebration ever. 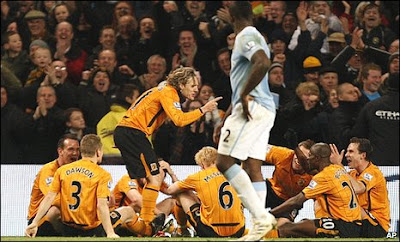 Something I was very annoyed about yesterday was being bodysearched by security staff at the turnstiles. Only visiting fans are searched in this humiliating way - not home fans. Who vets the searchers? How are they trained? Jeez - we paid £29 each for a ticket and nowhere does it say on that ticket that you will be frisked by a stranger in a fluorescent jacket. I was searched at football matches several times in the distant past but this hasn't happened for a long time and I shall be firing off complaints in various directions about Man City's arrogant breach of basic human rights. They will wish they hadn't laid a finger on me.

They also made visiting fans remove bottle tops from any drinks they may have brought to the game. Yet this same club's safety stewards stood idly by while a small section of their supporters spent much of the match deliberately goading Hull City fans with foul-mouthed abuse instead of watching the football. Just not good enough - unlike the mighty Tigers who left the Commonwealth Games stadium with a richly deserved point.
- November 29, 2009