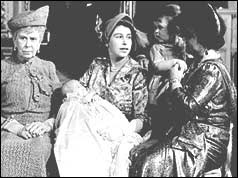 I expect that bloggers around the world will be anxious to join with me in wishing her noble majesty Princess Anne, the Princess Royal, a very happy sixty second birthday. Yes our beloved princess was born this day at Clarence House in London back in 1950. In the picture above our blessed queen is holding our royal princess in the music room at Buckingham Palace which is where Anne was christened in October of that year. Little Prince Charles is looking on mischievously and beside our beloved queen is Queen Mary (not the ocean liner of that name!) and Queen Elizabeth, wife of George VI who of course died so tragically in 1952.

Princess Anne is married to Sir Timothy Lawrence having divorced her first husband - the caddish womaniser Captain Mark Phillips in 1992. They had two children together - Peter and Zara. The latter was a member of Great Britain's equestrian team in the recent Olympics - following in her mother's footsteps for Anne you will certainly remember was a member of the 1976 Olympic team.

A little known fact about Princess Anne is that she is a keen pharologist - having visited all of Scotland's 215 lighthouses. There is no truth in the rumour that she bedded a protesting lighthouse keeper on each visit... This is possibly the most boring blogpost I have ever written so to enliven the ending, here is a recent photograph of the esteemed princess showing off her exquisite and much imitated hairstyle. Lady bloggers (& Arctic Fox!)  - if you're looking for a new hairstyle - this is it! The Recumbent Badger! 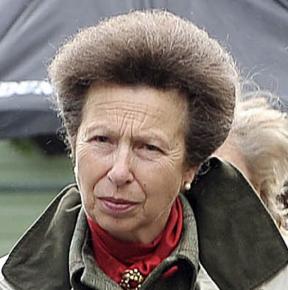