Surprisingly, one of my regular correspondents - a certain R.Brague of Canton, Georgia - has requested guidance in the art of potato peeling. Coming from "The Americas" - the natural homeland of the humble potato - I had assumed that he would already be conversant in the aforementioned skill.

Now I am going to let him and other lucky readers of this post into a little known secret about potato peeling. It was one passed down to me several years ago by my late and much-missed mother - Doreen (nee   Jackson). In a quiet whisper, with eyes looking nervously to the left and right, she told me that the best implement for peeling potatoes is in fact a cheese slicer! Yes my friends - a cheese slicer of the variety pictured below! 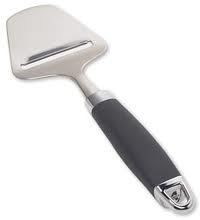 For twenty years I have used this implement in preference to any others or any sharp knives to denude many hundreds of potatoes - stripping away their dirty outer skins to reveal the creamy white flesh within. Of course, the hand you choose for holding the cheese slice depends on your dexterity. Normal people are of course right-handed but there are a few freaks out there who are left-handed. Being normal, I always hold the potato in my left hand and the cheese slice in my right hand.

One of the advantages of using a cheese slice is that the instrument reduces wastage of potato flesh that will often occur with knives or other useless types of potato peeler.

When peeling potatoes it is important to wash them in clean water and it is unwise to peel your "spuds" well in advance of  potato cooking. The stripped potato can discolour quite quickly so my advice is to chop and boil or fry soon after the peeling process has been completed. Of course, over in Ireland, families will often scorn the business of peeling - boiling any old potato with skin attached. I put this down to their prudish Catholic heritage. Priests must have told them to avert their eyes from the naked spud of God.

Over here in Europe, it is hard to imagine a diet that did not include potatoes but they first came to our continent in the latter part of the sixteenth century and were not widely grown until the eighteenth century. Imagine a life without chips or mashed potato, jacket potatoes, potato croquettes or scallops. It doesn't bear thinking about. The potato comes with its own special, protective skin waiting to be undressed. If you didn't know already - please remember the humble cheese slicer! Just as "a dog isn't just for Christmas", so "a cheese slicer isn't just for cheese"!
- August 18, 2012