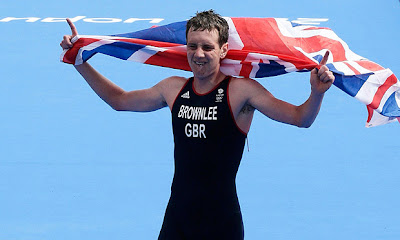 Alistair Brownlee - Olympic men's triathlon gold medallist London 2012 and his younger brother Jonathan - brave bronze medallist in the same gruelling event. And where do these tough, talented and generally admirable young men come from? Can you guess? Why - Yorkshire of course! Our Yorkshire nation is currently ahead of both Australia and New Zealand in the medals table and without all the magnificent Yorkshire medallists, Great Britain would probably be down near the bottom of the medals list with Uzbekistan and the Solomon Islands!

I watched nearly all of this morning's triathlon from the idle comfort of our sofa. Don't you also detect a certain irony in the contrast between couch potatoes munching snacks and Olympians busting their guts on the television screen? It's like obese kids playing computer games in which they control physically active cartoon heroes smashing through walls and leaping between buildings as mum sticks another pizza in the microwave and yells "Do you want Coke or Tizer?"

The strapline of the London Olympics is "Inspire a generation" - but although I enjoyed the Brownlee lads' performance this morning, there's no way I'm going to be taking up triathlons. I'd still be swimming around the Serpentine in Hyde Park long after the Brownlees had travelled back to their Yorkshire homeland and I don't think the wetsuit and green swimming cap would suit me either.

On behalf of Yorkshiremen everywhere - huge congratulations to Alistair and Jonathan! You have done our White Rose nation proud as these magnificent Olympic Games continue. My instinctive fears about a terrorist outrage appear to have been ill-founded and I just hope that this week continues in an untroubled fashion  -allowing yet more Yorkshiremen and Yorkshirewomen to add to Great Britain's amazing medal haul.
- August 07, 2012