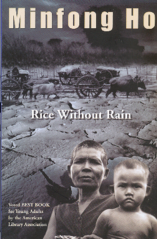 As in 2011, I am reading a novel with my Year 9 class called "Rice Without Rain" by Minfong Ho who is sometimes described as a Chinese-American writer, even though most of her childhood was spent in Thailand. I love reading this book with intelligent Thai children as it is about their country and fairly  recent political history. Descriptive colour is also tender and well-considered, enhancing the plot without shrouding it. There are many helpful language lessons that can be drawn from the text - especially with pupils for whom English is very much their second language.

The novel begins in  the far north of the country where the villagers of Maekung depend on their rice harvest. When there is drought they suffer and that suffering is exacerbated by greedy landlords who claim half of the entire harvest thereby condemning the peasants to abject poverty.

A bunch of idealistic students arrive from Bangkok, keen to learn about the real Thailand and if possible to initiate change as they look towards a brighter future. Their leader is Ned and he falls in love with a village girl called Jinda. Later she joins him in Bangkok where revolution is in the air but the military authorities will have none of it and their response is as fierce as it is brutal.
So often, children in developing countries have to chew on English Literature syllabus content that is well-removed from their own lives. I recall that in the early seventies I had to teach "Pygmalion" to Pacific island youngsters who had mostly never left their little island - seven miles long and two miles across at its widest point. And here in Thailand when students pursue Cambridge University exams they're likely to find themselves reading "Romeo and Juliet", "Of Mice and Men" or the poetry of Ted Hughes or Seamus Heaney. They might as easily be reading Martian texts. So it's nice to celebrate and acknowledge Thailand's existence through a novel that speaks directly to its young people and teaches them a lot about their country's recent past. This is how the novel begins:-
Heat the colour of fire, sky as heavy as mud, and under both the soil - hard dry, unyielding.
It was a silent harvest. Across the valley, yellow rice fields stretched, stooped and dry. The sun glazed the afternoon with a heat so fierce that the distant mountains shimmered in it. The dust in the sky, the cracked earth, the shrivelled leaves fluttering on brittle branches - everything was scorched.
- March 11, 2013