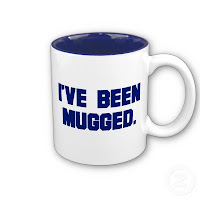 I never really thought about the derivation of the term "mugged" until Saturday when all of a sudden I felt like a complete mug. I was cycling north of the ancient town of Ayutthaya, heading for a hotel that has a small aqua park. It was two o' clock in the afternoon and I was on a main road heading out to the countryside. Suddenly there's a motorcyclist next to me with his "Maid Marion" on the back. He grabs the little rucksack from my front basket and speeds off. It took less than a second and I didn't have time to react. Hindsight tells me I should have turned my bicycle wheel into the motorbike knocking both of the villains off and it also tells me I should have done what I usually do - hook the backpack straps around the handlebars.

He took my faithful "Berghaus" bag that has been my companion on many's the journey - walking or travelling abroad. I had only just washed and dried it for the first time in its life and it was looking rather dandy. He also stole "Dream from my Father" by the erudite and admirable leader of the free world - Barack Obama. This book was given to me by Denise before she returned to England with Baby Alexa and the bamboo bookmark was from Vietnam and given to me by my daughter. There were also some umopened "Kleenex" tissues that Shirley gave to me about three years ago - "They might come in handy", my Rupert the Bear swimming shorts, my Cambodian sunglasses, a towel from my little hotel in Ayutthaya - it had blue fishes on, my Nivea sunspray, my bush hat from New Zealand ( a hat that actually fitted my huge bonce!) and... and... this is the hard part - my lovely Digital SLR Nikon camera. Oh woe is me!

What the little scumbag didn't take was my wallet that for some reason I had left in the pocket of my shorts and my passport which was back in Bangkok. He also didn't bash me or stab me and I am well aware that this little episode is as nothing compared with the troubles that some people in the world are experiencing even as I type this account.

Afterwards, the sympathetically angry owner of my guesthouse kindly drove me to The Tourist Police station where I handwrote a statement and then with painful slowlness the duty officer handwrote her report. Then I was taken to the central police station where the process was repeated with not a computer in sight. It was like a two and a half hour extra punishment on top of the mugging but I survived it.

This is only the second time in my life that I have been mugged. I am usually so wary, so guarded and I guess I just didn't foresee such an event happening on a fairly busy country road in the middle of the day. But I am not to blame - not really - who is to blame is the selfish, nasty, ugly, stinking bastard on the motorbike. I hope he enjoys the rest of "Dreams from my Father". I was up to page 100 and looking forward to the rest. And I hope he enjoys looking at my many photos of Thailand before he sells the camera for a song. I shall see him at the pearly gates and he will not get in! No way!
- March 17, 2013