They're all at it. On the subway train, at the airport, sitting in cafes, just walking along the pavement. I'm talking about the sodding mobile phone. More and more it's becoming like an electronic comforter - checking Facebook, texting messages, playing games and sometimes even making or receiving phone calls. Those who created this monster - Nokia, Apple, Motorola, Orange, Vodaphone and the rest must be rubbing their hand with glee even as they design new ways to squeeze yet more money out of the hordes of mobile addicts who share my planet. It is easy to feel like an alien from another world. 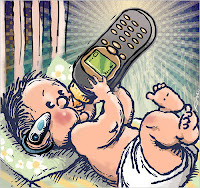 Before Jon and I left Kanchanaburi, we were sitting in a quiet and rather humble  riverside cafe mostly constructed from bamboo. We were the only customers and after a while we decided it was time for lunch. I tried to get the attention of one of the four members of staff on duty - three women and a young lad. All four of them were so entranced by their solitary mobile activities that they appeared to have forgotten what they were meant to be doing. We tried waving but in the end we had to get up to interrupt their button pressing in order to get some service. They were surely on very low incomes and yet they each had an expensive mobile phone or tablet.

It's the same everywhere, not just in Thailand. Spare moments are filled with jiggery pokery on the mobile and it can be as if real life is somehow inadequate, inferior. A couple of weeks ago at one of my favourite local restaurants - "The Banana Leaf" -  I noticed a married couple at the next table. They had finished their meal and she was busily playing a game on her mobile phone - something like "Tetris" while on the other side of the table the husband was playing his little shoot-em-up game. They weren't conversing, so hypnotised were they by their phones.

If anything, this plague is getting worse. Tweeting and texting, googling and simply checking to see if the rest of the world has noticed your existence. And it's all so fleeting, so flimsy. Not like hunkering down to read a good book or perusing a good newspaper. It's click-click and move on, flitting from this to that like a butterfly in a sort of virtual world beyond what is right in front of our eyes - Reality!
- March 07, 2013