Since suffering the abyssmal "21 and Over", I have visited my local Major Cineplex Cinema twice. The environment is super clean, the staff plentiful and efficient in their smart uniforms, the seat tickets are much cheaper than in England. The quality of sound is top notch. You sit there in the chill, munching cheap popcorn, remembering to stand for "The King's Song" which always precedes the main feature.

The two films I saw recently were "Django Unchained" and "Olympus Has Fallen". Thankfully, I enjoyed them both but regarding the former movie, I wonder if I am alone in thinking that Leonardo DiCaprio lacks the gravitas, the charisma and the simple stage presence to convincingly pull off domineering alpha male roles. He was fine as young fortune seeker Jack Dawson in "Titanic" - the role seemed perfect for him but in "Gangs of New York" he seemed unable to fill the boots of tough gangleader Amsterdam Vallon. It was cringeworthy and so it was in Tarantino's new film - DiCaprio seemed too boyish, too lightweight for the role of the powerful and slightly psychotic plantation owner Calvin J. Candie. 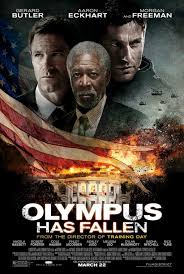 It was a very clever film - lots of humour, lots of spurting blood, lots of back references for ardent film buffs and lots of simple playfulness - deliberately toying with the spaghetti western genre. Tarantino, the director, and his team must have had a ball.

"Olympus Has Fallen" paints North Korea as some kind of predatory nation from outer space. Their well-trained agents attack The White House, hold The President hostage (thankfully not the truly heroic Barack Obama) and threaten to detonate all of America's nuclear arsenal so that the country itself will become a post-nuclear desert. But hey - surprise, surprise - those pesky North Koreans hadn't counted on the guts and sheer bravery of never-say-die US secret agent Mike Banning played by the Scottish film actor Gerard Butler. Single-handedly, like a latter day Superman, he takes on the might of the dastardly North Koreans and beats them, releasing President Asher and saving the free world. It was unbelievable but well done - a ripping good yarn with as many splattered gallons of blood as in "Django Unchaiuned".
- March 26, 2013