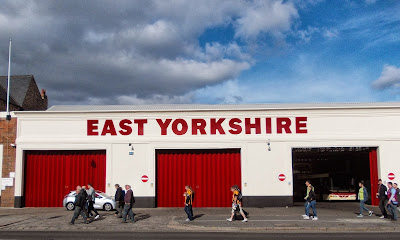 Back to my heartland today. Scooting across river plains on the M18 motorway and then over the Ouse Bridge at Howden to East Yorkshire. She spread before me like a magical kingdom - glistening in the sunshine - her early autumn fields like a patchwork quilt and beyond the seductive curvaceousness of the Yorkshire Wolds eased down to the wide chocolate-coloured Humber - crossed by its elegant filigree suspension bridge. I heard some sort of twinkly music - as if from a dream.

In Kingston-upon-Hull, I parked on Linnaeus Street - named after Carl Linnaeus - the famous Swedish botanist, physician, and zoologist, who laid the foundations for the modern biological naming scheme of binomial nomenclature. You must have heard of him? Then strolling on to Anlaby Road past Hull Royal Infirmary and the East Yorkshire bus depot - pictured above.

From Anlaby Road fly-over, I saw our temple appearing through verdant trees - The Kingston Communications Stadium. There were ninety minutes to go but already amber and black devotees were gathering to pay homage to our team of heroes - The Tigers - our beloved Hull City A.F.C.:- 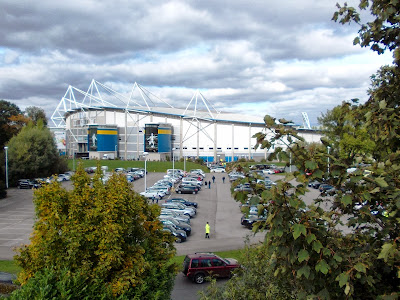 Inside the temple, the pilgrims gathered - 24,396 of us though this included a couple of thousand who worship a different god - whose garb is claret and blue and who dwells in a mysterious foreign land known as Birmingham. Even before the two lines of monks emerged from the tunnel to do battle these strange neanderthal visitors were chanting their god's name - "Villa! Villa!" 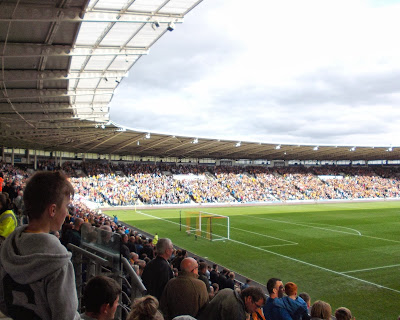 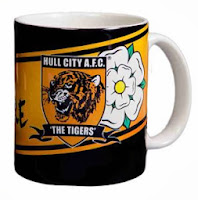 I enjoyed the game and the way our team stood up to Aston Villa - matching them all over the park. It finished nil-nil but certainly didn't appear "boring" to me. That's what the unconvincing Radio Five reporter said of the match. Sometimes a nil-nil game can be like chess - full of guile and tension - sensing that it will take just a moment for one player from either side to find the key that will unlock the stalemate. But it never came.

Before the game I bought a new Hull City mug - with the slogan "Pride of Yorkshire" emblazoned on one side and as has often been the case at Hull City matches over the years - our massed fans sang out the simple chant "Yorkshire! Yorkshire!" We never, ever sang "Humberside!" That was an invention of the evil Tory party that dwells in the incandescent bowels of the earth.... well, London and The Home Counties!
- October 05, 2013