There was once a disused cinema on Wolseley Road, Sheffield. For many years it was then used as a makeshift mosque. Round about 2004 that decrepit building was demolished and from the ruins emerged a spanking new purpose-built mosque - funded by the local Muslim population and overseas donations. This new mosque - The Madina Masjid Mosque opened in 2006 and towers above the Heeley Bottom/Lowfields area - making an enormous statement about this city's Muslim population - mostly from Pakistan. It seems to be saying - we are here to stay, we are proud of our religion and we are are no longer poor immigrants.

I have driven by the mosque many times. About two years ago I noticed a new legal office had opened up close to the new mosque - "Ashraf and Ashraf - Immigration Specialists". I am not necessarily proud of what I am about to say but the presence of that company with its headline raison d'etre has frequently made me shake my head in exasperation. I mean what are this company about if not to make money from other people's desperation and to somehow weave around and dodge through the British government's legal red tape? They say "Ashraf & Ashraf is a professional and friendly firm fighting for you and making Immigration simple." To this I would say - why should immigration be "simple"? To me it should be pretty damned difficult. And why is there a white BMW on the pavement?

I had hoped to get a good image of  the  "Ashraf and Ashraf"  business premises with the mosque behind but this was the best I could do:- 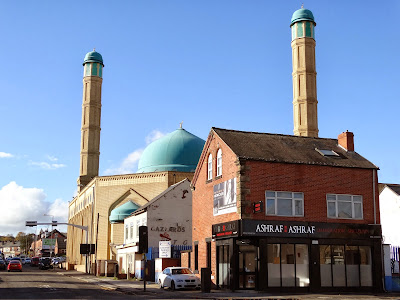 This is a better picture of the mosque:- 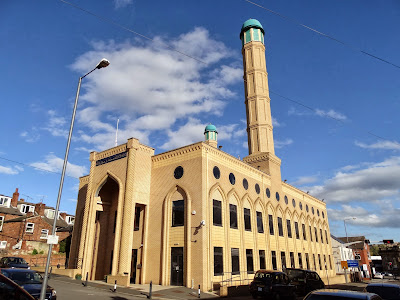 And this is the golden crescent on top of the central dome:- 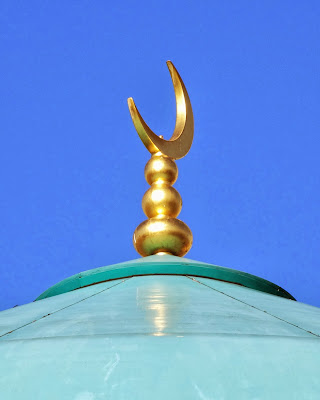 Soon after taking this photograph I was invited inside the mosque by a local taxi driver. What his motivation was for inviting a total stranger and lifelong atheist inside - I have no idea. I had to take my shoes off by the lobby area and went upstairs to the main prayer room. It was empty at the time I snapped this picture of the magnificent chandelier that hangs below the central dome:- 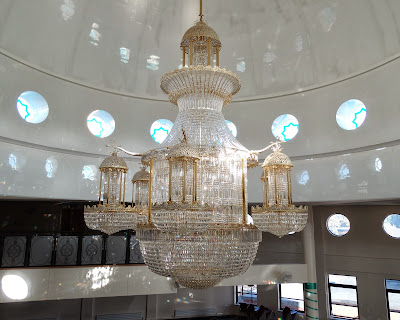 And so I have now decided to become a Muslim myself....only kidding! This is my kind of mosque and it is here that I shall worship Bacchus:-
- October 24, 2013