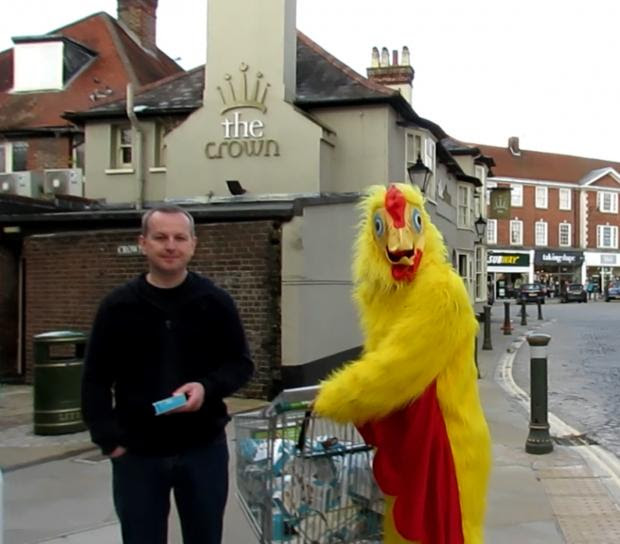 Recently an eighteen year old Sussex lad called Scott Moyse stumbled across a delightful computer glitch on the Thornton's chocolates website. Essentially, boxes of chocolates that should have cost a few pounds each were listed at only one penny per item. Quickly, Scott clicked in an order for four hundred boxes. With postage and packing the total bill came to a mere £10.90.

A few days later, four hundred boxes of chocolates were duly delivered to Scott's home in Horsham. Under ordinary circumstances, this purchase should have amounted to more than £1000. Such amazing good fortune for Scott and well done to Thornton's for doing the honourable thing in spite of their website error.

So - what did Scott do with all of those choccies? Surely, he could have earned himself a tidy profit - even if he had sold the chocolate boxes at half their retail price. But did Scott do that? No!

Instead, he dressed up as a chicken, loaded the boxes of chocolates into a shopping trolley and with his mate proceeded to the centre of Horsham where he gave his windfall out to passers-by. He said,“We thought it would make some people happy and it would be more enjoyable than just selling them.”

What a heart-warming story and this in a Sussex town that was recently identified as England's most stressed out place to live. I think they should make Scott Moyse the Mayor of Horsham. Then he could exercise his charitable instincts still further - waiving parking fines, heating old people's homes for free and teaching town councillors and special constables to do "the funky chicken" in their brand new chicken costumes. Scott for Mayor!
- October 31, 2013