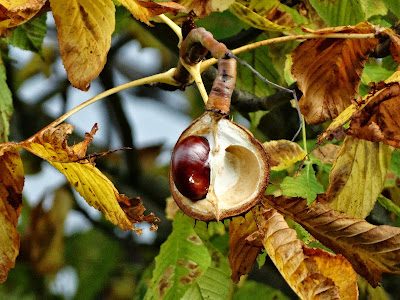 The conker is the fruit of the horse chestnut tree which first appeared in Great Britain five hundred years ago. It should not be confused with the sweet chestnut tree which was introduced as a nutritious winter food source by colonising Romans about 1,800 years ago. It is believed that the horse chestnut originated in The Balkans region of southern Europe.

The picture above owes much to my new camera. I was at least thirty feet from the conker pictured which was high above me in the conker tree I first planted with our son Ian - twenty seven years ago - when he was three years old. We found the successful seed on a Sunday afternoon conker collecting mission in the Ewden Valley near Stocksbridge. And we brought it to this house when we flitted from Crookes in 1989.

When hanging in trees, conkers are usually protected by their spiny outer shells but here you can see that the outer shell has already burst open and one of the conkers inside has escaped to the ground.

As a boy, every autumn, it was my mission in life to find the biggest conker of them all. With other lads from my village we would chuck sticks and stones high up into the overhanging branches of fruitful horse chestnut trees or even climb high and edge along precarious limbs in search of our holy grail. If we had fallen we would have probably died.

Conkers are fat and shiny - their surfaces like polished mahogany - until they dry out and start to shrivel after a few days have passed by. We used to play the famous game of "conkers" in the school playground - threading them with bootlaces before aiming them as hard as we could at our friends' dangling conkers. I recall the stinging knuckle pains that would usually accompany these fiercely fought conker matches.

My American friend Chris - in Ohio - had no idea what a conker was. Well there we have it Chris - and anybody else who might be vaguely interested. It is said that William the Conqueror enjoyed a game of conkers even though in 1066 there were no conker trees in Britain. Now there are a reported 432,000 in England alone - 432,001 if you include our Ian's tree.
- October 15, 2013