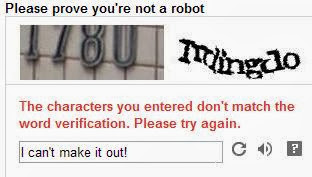 You must have come across the security device shown above. Very often, I have to keep clicking the curly arrow thing until I find a verification combination I can actually make out. If you don't get it just right you end up repeating the process. Why can't the numbers be clear and why do the letters often merge together so that you can't quite work them out? To paraphrase the great British Olympian - Sir Steve Redgrave - whoever invented this form of verification needs shooting!

If they really do want me to prove that I am not a robot, I can think of other ways of doing so. For example, I would be happy to send them a small plastic bag filled with toe nail clippings or even a stool sample. Failing that, I could take a scalpel and carefully cut in to my abdomen to fish out one of those unnecessary organs that wobble inside us - a spleen, the second kidney or the appendix for example. But that seems rather drastic - perhaps there are other ways of proving I am not robotic.

I know, I could send them a photograph, examination certificates and fingerprints, perhaps poems I wrote as a boy or the panda that shared my cot when I was a baby and which still sits next to our bed. Written depositions from upstanding members of the local community who are happy to testify that I am not a robot? A small vial of my blood? A bank statement?

But the thing is - who is actually asking me to prove I am not a robot? I have a strong suspicion that it is probably and ironically a robot - sitting in Blogger Control in front of a massive computer screen with coloured lights flashing on its sheet metal head. Maybe it's known as Robot Brague! Should I bounce a question back, asking the sender to prove that it is a robot? Perhaps requesting a bolt or an electrical circuit? 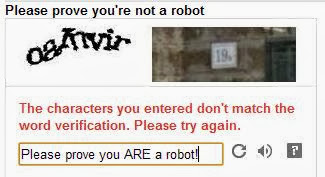