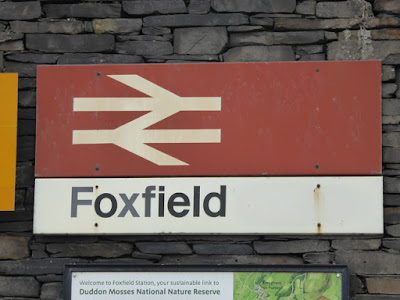 Like so many things, it happened gradually. It all began with distant sights of them - scurrying into passageways and people's drives - late at night. Or you would open the curtains in the morning to discover that they had toppled several rubbish bins in search of food. The poor things.

Then they became bolder. You would see them in the daytime. Their instinctive fear factor was diminishing. They came into our gardens. They lolled in the sunshine. They chased pigeons or gobbled up bird food, sniffing everywhere with their long and no doubt sensitive snouts,

I recall one evening in the summer of 2015 when there were three of them frolicking on our lawn. One of them saw me open our back door and instead of hurrying away for cover as they used to do, he strutted past the bird table and came right up the path as if he was planning to come into the kitchen. I said to him, "You're not coming in here mate!". And when I closed the glass door he simply remained standing there, two yards away, glowering at me. Totally unafraid.

Perhaps we should have done something about it when we had the chance. But now it is too late.

They started to walk into shops - butchers and bakers and supermarkets. Though they couldn't talk, they still managed to convey the message that they needed feeding. And just to get rid of them, shopkeepers tossed them sausages and scotch eggs, ham rolls and frozen beefburgers. Old ladies became afraid of venturing out on their weekly shopping trips and sensible parents kept their children at home - especially the babies.

I knew that something very peculiar and unnerving was happening when I caught the number 88 bus into the city centre one morning in the spring of 2017. Down at Hunter's Bar three foxes got on, ignored the driver and rushed past me to the back seat. There they sat, scratching, yelping and whining as if engaged in some hideous vulpine conversation. A young woman with a baby hurried off the bus at Berkeley Precinct, nervously glancing over her shoulder at the back seat passengers as her baby yelled like a warning siren.

They came into our cinemas and our libraries. They drank beer in our pubs. Restaurants were besieged by them though for some reason they kept well away from Kentucky Fried Chicken outlets. Primary school classes were often invaded - to such an extent that anxious parents began to keep their children off school. In a few months, the suburban streets of Sheffield were awash with "For Sale" signs.

I was determined not to give in. There was no way I was going to submit to an army of marauding foxes but then one morning I looked out of our window to see a big removals lorry outside number 177, just across the street from us. It was where Catherine had lived with her two little girls before fleeing to her parents in St Albans. And as I watched the removals lorry being unloaded, it became clear to me that a family of foxes were moving in! I rubbed my eyes. Surely this could not be.

It was only a few years back that the invasion began. Stealthy and unperturbing at first. For heaven's sake, I even bought them dog food and threw out chicken carcasses. We had felt sorry for them. Some had looked scraggy and painfully thin. But now they are literally living in our houses. The foxes are taking over and last evening on the BBC News the London-based newscaster smirked as he jokingly renamed our city "Foxfield". There were moving images of the new market on The Moor - now a fox-only zone, foxes driving taxis and fox families strolling through our parks. Down at the town hall, newly elected councillors were arriving in shiny limousines and do you know what? Yes. They are all foxes. All of them.
- July 22, 2015