In the fading light of day, there was a regular visitor on our lawn last evening. Yes, it was our scraggy friend Fred Fox. At first he was just lying on his belly with his radar ears following the slightest of garden noises. He saw me busying myself in the kitchen and watched my every move. These humans - you just cannot trust them you know.

We had no cans of delicious "Fox Food" in the pantry so, in spite of Mama Thyme's vehement disapproval,  I tossed him a chunk of the beef joint we had on Sunday afternoon. Of course he gobbled it down. It must be a challenge - scavenging for food in the urban jungle - and there will be days when hunger gnaws mercilessly at Fred. Like a cancer. 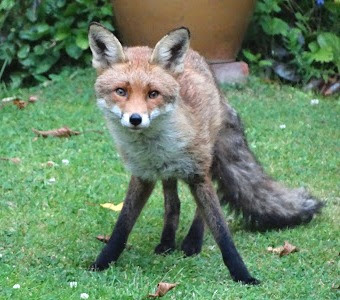 He has a pronounced limp and some of the fur on his rear end is missing. He is not in the best condition for chasing pigeons or lifting the lids of wheelie bins in search of tasty leftovers.

When I was a boy, foxhunting was still legal in Great Britain. Twice a year the Holderness Hunt would gather outside "The New Inn". Twenty or thirty hunters on horseback. They wore the traditional gear - black riding helmets with peaks, white trousers and red tailcoats. As they drank their fortifying stirrup cups - whiskies or hot toddies, their baying pack of foxhounds yelped excitedly ready for the chase. The riders were all unfamilar posh people. None of them dwelt in our village. They just arrived twice a year and these were  the only occasions we ever saw them.

The hunt leader would blow his horn and they'd be off across the surrounding farmland, heading for the thickets where foxes lurked in their dens. A steamy mist hung above the yelping  pack of hounds, intoxicated by a communal bloodlust. And the riders whipped the rumps of their trusty steeds as they cantered across the fields.

Once, half a mile away and adjacent to the appropriately named Fox Wood we saw a little ginger shape pursued by the pack and behind the dogs came the redcoated hunters galloping pell mell. We were watching from the road. As I say, it was faraway but soon the chase ended. You could see the distant hounds and the horse riders circling the kill. In my imagination I watched the frightened quarry - one of Fred's more healthy and more secretive country cousins - being ripped apart by forty hounds that had deliberately not been fed that morning. I was ten years old but I  knew it was wrong. No animal should have to die that way.

Later the laughing hunt leader showed off his prize outside "The New Inn" - a bloodied fox's tail.

For redcoats.
We are coming
So I advise you start running

We will get you.
So - Tally ho my friend
Tally ho! 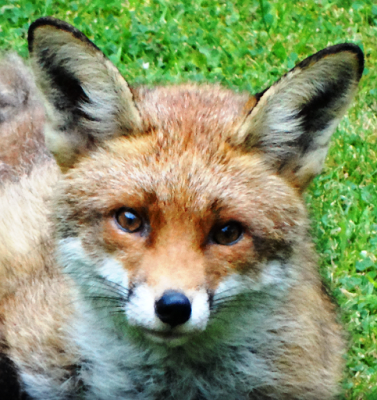