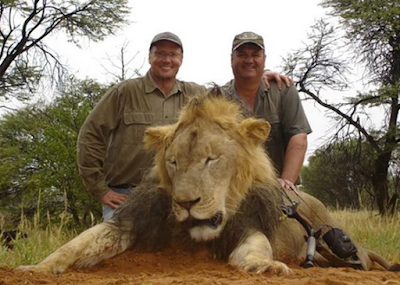 You are now famous around the world for killing Cecil. You are such a brave man! Firing an arrow into Cecil and then following him in a jeep for forty hours before shooting him dead. Wow! No wonder you were smiling proudly in the photograph at the top of this invitation. Cecil may have been King of The Beasts but you Walter are King of the Hunters.

Not only have you rid the world of a dangerous man-eating lion, you have also bravely executed Marmaduke the Elk, Gordon the Zebra, Harold the Moose, Pierre the Black Bear, Darren the Grizzly Bear, Adrian the Rhinoceros and whole generations of deer and Minnesotan water fowl. What a guy you are Walter!

I can understand entirely why you chose to spend $50,000 on the killing spree rather than giving that money to African charities that tackle AIDS, homelessness and starvation. Ridding Zimbabwe of Cecil was a way of helping the country to get back on its feet and assist its benevolent and much-loved leader Robert H. Brague Mugabe.

Because of your great achievements in the manly world of hunting, I am inviting you to join me and some other bloodthirsty hunters upon the moors west of Sheffield. It is said that there's a monster out there with unnaturally  white teeth and a shiny bald pate. It preys on sheep, women and small children and has a ludicrously high opinion of itself.

We will gather by the car park at Ringinglow -  me and Fred Fox, Higgy, Steve Howlett, bloggers like Graham and Jennifer and Mama Thyme  and Carol from Cairns and Lee and an army of ordinary folk wearing Cecil T-shirts. We will chase the cruel monster mercilessly till he's breathless, sweaty and crawling like a wounded lion amidst the heather and the gorse and then we will blast his big-headed brains out with a Canadian hunting rifle.

As it happens, our local moorland monster is also called Walter. What a co-incidence!

I await your positive response with eager anticipation.