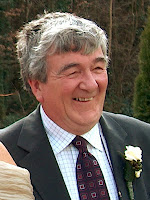 Last month two milestones were reached. June 28th was the fifth anniversary of my brother Paul's death. He was only sixty two and died unexpectedly in his sleep. I blogged about it all. For example - here and here and here. Though Paul is no longer strutting about in the land of the living,  he remains very much alive in my memories of him. Death? You could never get rid of Paul so easily. I hear his fiddle and his jokes and his frenetic "Bye-bye-bye-bye..." whenever he finished a telephone conversation. Mostly he lived life in overdrive - keen to feast on it all. Quiet relaxation was never his forte. I remember him most days and I smile for Paul really and truly lived and not all of us can claim that.

Very much in the shadow of Paul's death, on June 23rd I reached my tenth anniversary of blogging. Yes. It was on June 23rd 2005 that I wrote my first ever post for this humble Yorkshire blog. It was called "Beginnings" and this is what I wrote:-


So this is England in mid-summer. Lovely warm weather and you know what, they're all bloody well complaining! "Oooo it's too hot!" "Open a window!" "Oh I feel faint!" Whingeing whining wimps! I just love to barbecue, walk out in shorts, sweat, wear flip flops. If only all of our summers had long hot spells like this! Leather on willow. Swallows performing acrobatics in the evening sky. A glass of ice cold light white wine with condensation running down the side. "Oh! It's too hot! I couldn't live in a foreign country if it's like this!" As my old mate Trog used to say - Knickers! Knockers! Knackers!

When I composed that first post I had absolutely no idea that I would still be blogging away ten years later but the ideas keep coming and the course of my life keeps unfolding through these endless blogposts. There have been 1808 posts so far and at least 448,000 visits - over half a million according to Blogger. Perhaps I will still be blogging on my own deathbed, tapping away my very last blogpost on a laptop:-

"The light is fading. I can hear the ticking of the hospital clock. My heart is faltering but I can see St Peter ahead. He is opening the pearly gates. He is about to speak to me - "Welcome my son! What's the password? It must include at least one capital letter and a numerical figure" I can see Paul just inside the gates and Mum and Dad and all the others I knew but I cannot remember the freaking password and now St Peter is looking stern and he is pointing to the other place. Shit!"
- July 14, 2015