No lead is mined in Derbyshire any more but for a thousand years it was a vital resource. The Romans knew about it and Derbyshire lead was even exported to Rome and Pompeii. Little mining towns and villages grew up on the back of the lead mining industry - Bradwell, Stony Middleton, Tideswell and Wirksworth to name but four. They were characterised by a jumble of small mine workers' cottages - most of which still stand today even though the lead miners have all gone.

One day I really must visit the lead mining museum in Matlock Bath. I passed it yesterday on my way to Middleton-by-Wirksworth for a nice, long country walk in beautiful summery weather. From Middleton I headed westwards by a hillside that is still peppered with the evidence of mine workings - piles of stones and hollows and broken walls. The hillside was still being worked in the early nineteenth century.

Then onwards .past old limestone quarries and down into the valley past Arm Lees Farm then up the other side where I decided to veer away from the course of the public footpath to investigate an ancient tumulus in Field 40 on Perasons' Farm. The mound is now covered with nettles. I tarried there a while, close to what was probably a burial site - maybe four thousand years old though little seems to have been written about it.
Down to the course of the former High Peak Raulway and then down Hopton Incline which for many years was the steepest piece of railway track in England at 1 in 14. Old steam trains often had to have two or three runs at it in order to make it to Hopton Top. I sat on a bench there, ate my apple and swigged one of my bottles of water.
Then onwards through Hopton Tunnel before leaving the old railway track and striking out in a south westerly direction to Wirksworth, past old mine workings and quarries. Down The Dale to the charming town itself. On a hot July afternoon it looked quaint and lovely though I was very aware that the place was built on hard toil. Appearances certainly can be deceptive. 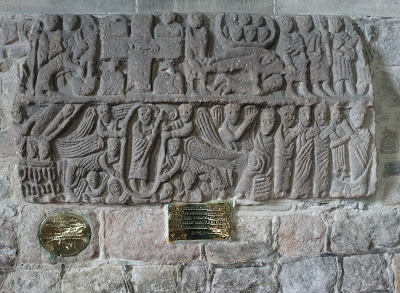 It was half past three and schoolchildren were about. Time to get my camera back in its case before the two mile hike up the hill to Middleton. Several of these secondary schoolchildren were doing the same and I felt a pang of pity for them - having to do this laborious walk day after day. Back in Middleton I entered "The Rising Sun" where the charming barmaid provided me with a pint of thirst-quenching bitter shandy and a packet of Lincolnshire-made potato crisps.

It had been another super walk, filled with such wonderful sights. As well as visiting the lead mining museum in Matlock Bath, I really must return to Wirksworth in the not too distant future. Shirley would appreciate that little town too.
- July 11, 2015