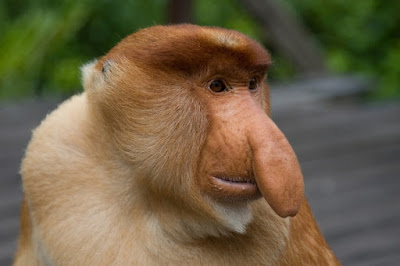 The male Proboscis Monkey is significantly larger than the female measuring up to 76cm in height and weighing more than 20kg, both having a long tail which can easily be the same length as the body, which is used to help the Proboscis Monkey to balance whilst it is leaping through the trees. Adults are mainly pale orange to light brown in colour with a richer coloured head and shoulders and grey limbs and tail, and a light pink face. The protruding nose of the Proboscis Monkey develops with age with infants having more monkey-like noses and older mature males having larger and more bulbous ones. Although scientists are still unsure as to exactly why the nose of the Proboscis Monkey grows so big, it widely believed to be to do with attracting a female mate as the noses of females are much smaller. 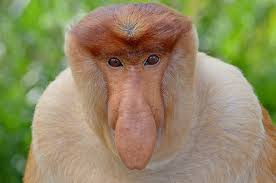 Although the Proboscis Monkey is technically an omnivorous animal, the bulk of their diet is comprised of tough mangrove leaves which are pulled from surrounding trees. It is because of the fact that they are leaf-eating monkeys, that the Proboscis Monkey has a large and swollen stomach that is made up of chambers containing a special cellulose digesting bacteria that helps to break down the leaves. This is however, a very slow process and means that the Proboscis Monkey's stomach is often full and can contain up to a quarter of the individual's total body weight. The Proboscis Monkey supplements its diet by eating other plant matter including shoots, seeds and unripe fruits along with a passing insect on occasion and does so predominantly in the trees, preferring not to come down to the ground.


Today, the Proboscis Monkey is listed by the International Union for the Conservation of Nature as an animal that is endangered in its natural environment and could face extinction in the near future if better conservation measures are not put into place. Population numbers are thought to have dropped by up to 80% over the past 30 years with numbers continuing to decrease. There are thought to be around 7,000 Proboscis Monkeys left in the wild today and very few are found in captivity as they simply do not respond well to the artificial conditions. 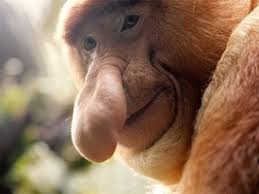