Out on the roads, there's a new breed of cyclist. Their bicycles are hi-tech and their apparel has a space age character - cycling glasses that hug the face, fluorescent jerkins and lycra leggings, aerodynamic helmets - sometimes adorned with mini-cameras or flashing lights, headphones attached to smart phones.. But what is most alarming about many (not all) who belong to this strange new breed is their attitude. They seem to be of the opinion that the roads, and the pavements for that matter, belong to them and that all drivers of motor vehicles are dangerous idiots.

Yesterday in south London, an angry member of this alien two wheel  tribe smashed a car window with his bicycle lock, sending shattered glass over a baby who was asleep in the back of the car. It was apparently an act of road rage. The cyclist seems to have been of the opinion that cars should automatically give way to him when he is undertaking on the inside. Read about it here if you are interested.

In my mind I have a clear image of a fellow called Joe Grubham who lived in my village when I was a lad. He was the local road sweeper but often you would see him out and about on his sturdy old bicycle. It was built to last. When Joe was riding it he wore bicycle clips on the bottoms of his suit trousers to prevent them from catching in the chain or becoming oily. On his head he wore his flat cap and there'd frequently be a lit pipe in his mouth. If he saw me - or anybody else, he'd say "Morning!" or "Grand day!" before pedalling off on his merry way. How different today's new breed of cyclist seems. 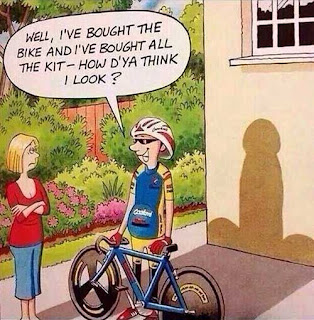 I have drawn up a list of ten proposed rules for today's cyclists in order to bring back the civilised cycling friendliness that was once represented by people like Mr Grubham. Let's call them the "Golden Ten":-
1. Cycling on pavements is strictly forbidden.
2. Cyclists should keep to the side of the road, never straying more than one metre from the kerb unless turning right (left in USA, Canada and the rest of Europe). In addition, if turning right, a clear hand signal is required well in advance of the turn.
3. Cyclists are not allowed to jump traffic lights or pedestrian crossings. If the light says stop you must stop just like the driver of a motor vehicle.
4. If cycling at night, cyclists must have lights on their bicycles - both back and front.
5. Cyclists are only allowed to ride side by side when on very quiet country lanes. Otherwise, they must ride in single file.
6. If the driver of a motor vehicle uses his or her horn it is simply to warn a cyclist to get out of the way for safety reasons. The use of said horn must not be seen as a provocation or responded to in that manner.
7. In busy traffic it is illegal for cyclists to lean on, punch or even touch motor vehicles.
8. The wearing of lycra shorts and leggings is prohibited forthwith. Cyclists must observe a decent dress code. For men this will be known as "The Joe Grubham Code" and for women "The Nora Batty Code".
9. Though cycling helmets are sensible, current helmet fashions are not and cyclists will be required from now on to wear old-fashioned rounded helmets with peaks. (see photo above)
10.  Road taxes are paid by the drivers of motor vehicles and similar road taxes must now be paid by cyclists. The cheaper the bicycle, the lower the road tax. Owners of ludicrously expensive bikes must pay the  maximum road tax - presently £505 a year but if the bike you ride is like Joe Grubham's you will pay nothing.

Finally, a friendly message to cyclists:-


Hi there! We are all people out there on the roads and we should
try to get along - drivers and cyclists alike. If cyclists
follow the "golden ten" rules, everything should be tickety boo!
Have a nice day!
By order
A. Driver
(Ombudsman for Cycling Correction)
- October 21, 2015