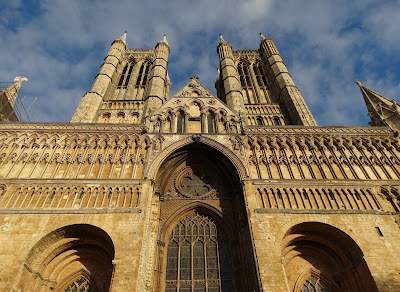 Lincoln Cathedral was the tallest building in the world for 238 years (1311–1549). In 1549, the massive central spire collapsed during a storm. If that spire had remained in situ, Lincoln Cathedral would have remained the tallest building in the world until 1890 when it would have been surpassed by Ulm Minster in Germany. With the spire, Lincoln Cathedral stood 525 feet above the ground - three feet taller than Egypt's Great Pyramid.
What an incredible achievement by the builders! The resources involved would have been phenomenal. I don't think that there's any modern parallel in the world of construction. In 1311 there was no tubular scaffolding, no trucks to transport 70,000 tons of  dressed stone from distant quarries, no pneumatic hoists or builder's yards for the purchase of bags of cement and sand. Financially, the equivalent of billions of pounds must have been provided by the church establishment. Nobody knows how many men died during the cathedral's construction.

Yesterday, I caught the 9.44 train to Lincoln in order to undertake another country ramble. The walk took me past Brayford Pool, along The Foss Dyke and out into fertile arable land by dykes and ditches. I reached the village of South Carlton at two o' clock and spent a little time inside the church there but when I came out the blue skies of the morning were turning grey.

I marched onwards to Burton-by-Lincoln and on the long path to Riseholme I met an elf. He was sitting under a tree with a can of lager - way out in the countryside. He had various gold piercings around his face and tattoos on his arms. He asked me if I had any tobacco but of course I am a committed non-smoker. I wanted to take a photo of him but revealing my camera might have been a temptation for him and I wasn't in the mood for wrestling with an elf.

From Riseholme across the A45 and back into Lincoln via the sprawling council estate of Ermine. By the time I reached the great cathedral it was five o'clock. Evening sunshine burst through the sky's grey canopy to illuminate the church's medieval magnificence. I stepped inside, surprised to avoid an admission charge. Beyond the rood screen, the choir were rehearsing, filling the void with an eerie harmonisation that swirled up to the vaulted stone ceiling above just as it would have done when medieval monks were the singers.

Back to Sheffield on the 18.24 train via Gainsborough, Worksop, Retford and Kiveton Park. A grand day out and another fourteen miles on my rambling mileometer.