Why has the story of the British Suffragette movement never been properly told in film before? The long delay seems to me to be a signal that though votes for women were fully secured in 1928, the legacy of our patriarchy endures.

I walked into the city centre yesterday to watch "Suffragette" at The Showroom Cinema. Written by Abi Morgan and directed by Sarah Gavron, the film seeks to dramatise the struggle for female suffrage in Great Britain. It begins in a steamy laundry in the east of London where women graft in oppressive conditions to earn a crust. It is here that we find the central character - Maud Watts played by Carey Mulligan.

Reluctantly, she is drawn into political activism championed by Emmeline Pankhurst, the leader of the women's suffrage movement. Maud ends up in prison and loses both her husband and her son who is put up for adoption. There is nothing that Maud can do about losing her beloved little George and in a moving farewell scene she clasps the bewildered child's face and says, "Never forget my name Georgie. I am Maud Watts - your mother. Maud Watts." 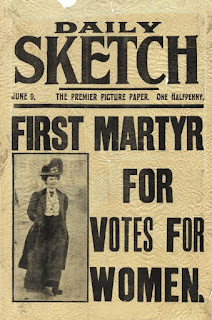 One of the activists is a quiet but determined young woman called Emily Davison. The Women's Social and Political Union is becoming frustrated because the government are effectively quelling press reports about their members' activities. Accompanied by Maud, Emily Davison attends the 1913 Epsom Derby where the king's horse Anmer is scheduled to run. As the horses gallop towards the finishing line, Emily bravely emerges from the crowd and stands in the path of the king's horse. She is violently knocked over and sustains injuries that kill her a couple of days later. The tragedy becomes worldwide news, like letting a cat out of a bag. It is a turning point in the quest for women's suffrage.

The film ends with a rolling list of countries and the years in which women around the world achieved the vote. The last country on the list is Saudi Arabia where women are still waiting.

The events that the film depicts happened relatively recently in the great span of history. Around our planet, many women are of course still treated like second class citizens and even in liberal western countries, there are still shadowy forces that continue to work against women. But we are surely getting there and we live in a time when there is a much  keener sense of equality than there used to be. In this we should give thanks to brave women like Emmeline Pankhurst, Emily Davison and the fictional Maud Watts for they were prepared to raise their heads above the parapet, refusing to surrender for they knew that their cause was very righteous and true.
- October 24, 2015